European airline shares mostly rebounded on Monday (23-Aug-2010) as wider markets rose on news of merger and acquisition activity and gains in the mining sector. Airline shares were also boosted by another day of declines in oil prices (-0.4%) to USD73.14.

Turkish Airlines (-3.8%) declined despite reporting a 181% year-on-year rise in net profit for the six months ending 30-Jun-2010, to EUR134 million. The improvement was the result of a 28% increase in sales revenue for the period to EUR134 million.

However, operating profit declined 34% for 1H2010 to EUR55 million. The carrier attributed the decline to rising fuel prices, with fuel expenses up 74% for the period.

The carrier stated it expects a recovery in the global aviation industry to continue for the remainder of this year, provided there is not further “unexpected economic stagnation”. The carrier thus expects its financial performance to continue to improve. 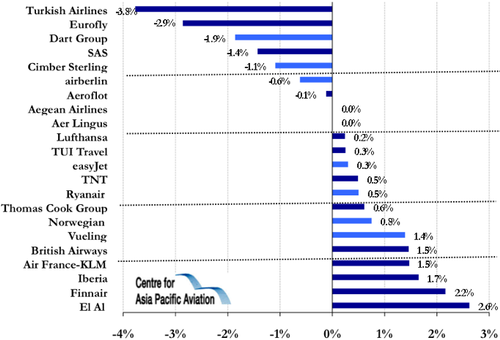