Various media reports last week suggested Turkish Airlines is considering the feasibility of adding A380, A350 or B787-8 aircraft to its fleet. A widebody fleet decision is expected in early 2011.

The carrier had announced plans to operate 184 aircraft by the end of 2011, up from 142 now. Turkish Airlines has orders for 89 aircraft, including 24 widebodies.

Turkish Airlines last week took delivery of its first of 10 A330-300 aircraft and first of three A330-200 freighters. The A330-200F will be used by Turkish Cargo on long-haul routes to Shanghai and Hong Kong, and to expand the Turkish Cargo network.

Canada’s WestJet has signed a codeshare agreement with Cathay Pacific, the first of a series of deals to cover the Asian, US and European markets. Air France-KLM, which has an interline agreement with the Canadian LCC, will have to wait until 2011 to consummate a codeshare link. WestJet Executive VP Strategy and Planning, Hugh Dunleavy, stated: "I would not turn on another codeshare until after the new year is completed”, citing additional strain on staff during the busy Christmas season. 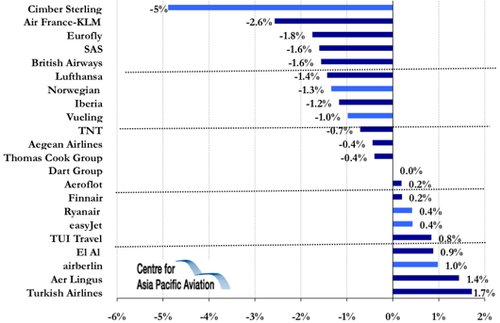