Turkish Airlines (+4.7%) rose higher after CEO, Temel Kotil, stated the carrier plans to expand its long-haul network, with plans to increase total weekly services from 5,500 to 10,000. The carrier also plans to increase services to the US from 10 weekly to 35 times weekly in 2011 and is considering new routes to Bangladesh, Vietnam and Manila. The company plans to complete the purchase of 90 aircraft by 2012 for fund its network expansion.

The CEO added that the carrier is also considering strategic acquisition opportunities including Serbian Airlines, although no further details were provided.  For 2010, the carrier expecting USD6 billion in sales and 73% load factors.

Thomas Cook Group (-6.3%) declined after releasing a pre-close trading update, ahead of the release of its full results on 30-Sep-2010. The company's UK operations have been relatively stable against a "difficult background" and trading in other markets has been in line with or above company expectations. Thomas Cook's cost experience in the UK has "not been as favourable as expected", particularly in airline operations, and this will result in a net impact of around GBP10 million on the underlying group operating profit.

Also affecting Thomas Cook shares, Germany's Bundeskartellamt imposed a fine of EUR1.2 million on Condor Flugdienst GmbH, a fully owned subsidiary of Thomas Cook, for its involvement in an illegal agreement on the prices of flights from Germany to Turkey. A fine against SunExpress, a Lufthansa/Turkish Airlines JV, which also participated in the agreement was waived in accordance with the Bundeskartellamt's Leniency Programme. According to the Bundeskartellamt's investigations the two companies agreed, among others, in the summer of 2009 that SunExpress would not offer flights from Germany to Turkey for less than EUR99. The price of an air ticket was to be set at no more than EUR10 below the price offered by Condor. The agreement covered routes simultaneously operated by the two companies. Only the seat-only business was affected. 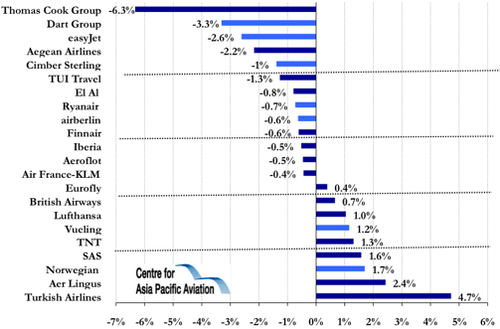