In 2013, Turkish Airlines' growth in its underlying operating profit stalled as its margin slipped by 1.4ppts. The competitive environment increased the pressure on unit revenues in the latter part of the year and the carrier was unable to contain unit costs sufficiently to drive profits upwards. The weakening of the Turkish lira had the effect of inflating both revenues and costs when reported in TRY, but this does not change the underlying weaker development of RASK versus CASK. Currency losses and higher interest charges resulting from increased borrowing led to a fall in the net result in 2013.

Operationally, Turkish Airlines remains very successful, with sales enjoying another year of growth in excess of 20% and load factor making further gains. However, the fall in operating margin in 2014 and an uncertain outlook into 2014 show that converting this into sustained profit growth is proving to be less than straightforward.

In 2013, Turkish Airlines (THY) saw its net profit fall by 41% to TRY683 million (USD357 million). The net result was adversely affected by higher financial expenses, both as a result of higher interest charges due to increased borrowing and also foreign exchange losses.

The operating profit, which probably better reflects the underlying performance of the business, was flat (+0.5%) at TRY1,090 million. In USD, operating profit fell by 7% to USD577 million. Revenues were up 27% to TRY18,777 million (USD9,826 million), but THY was unable to convert this into higher profits. The operating margin slipped by 1.5 ppts to 5.8%.

Strong revenue growth is not always converted to profit growth

THY’s top line growth has remained stellar for a number of years, running at a compound average rate of 25% pa from 2005 to 2013 so that the 2013 version of the company recorded six times the annual revenues of its 2005 predecessor. Although operating profit in 2013 was almost 12 times its 2005 level, its path has been more volatile, with both decreases and increases from year to year and operating margin has been eroded from its 2009 peak of 11.8% to 5.8% in 2013. Moreover, net profit has increased ‘only’ five-fold over this period and almost vanished in 2011.

In spite of the variability of its profits, however, THY is one of the very few European full service carriers not to have tasted losses in the years since the global financial crisis. 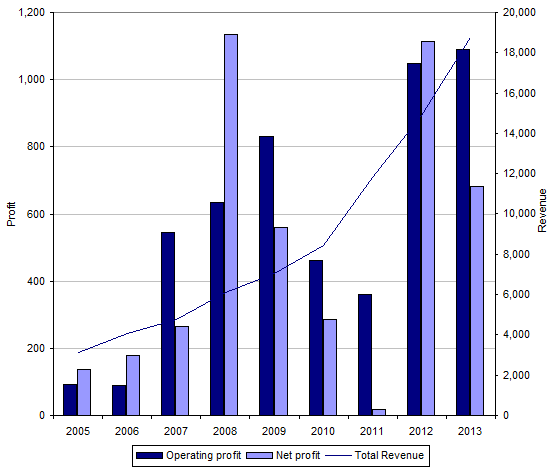 The group’s gross cash balance of TRY1,382 million (USD647 million) at the end of 2013 was equivalent to only 27 days of revenues, the lowest cash cushion for at least eight years. While the group’s balance sheet is by no means in a state of weakness, THY may wish to improve its liquidity and to attempt to contain the trend of rising net debt. 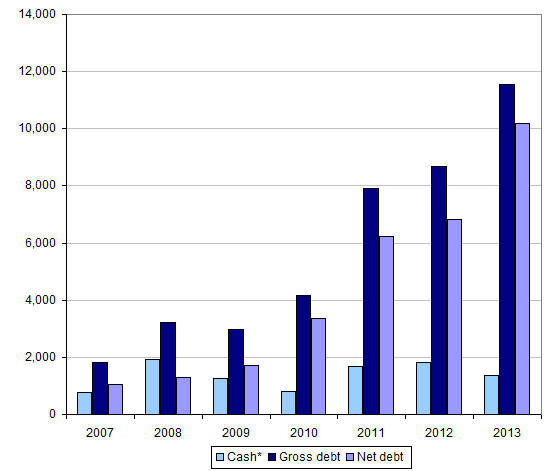 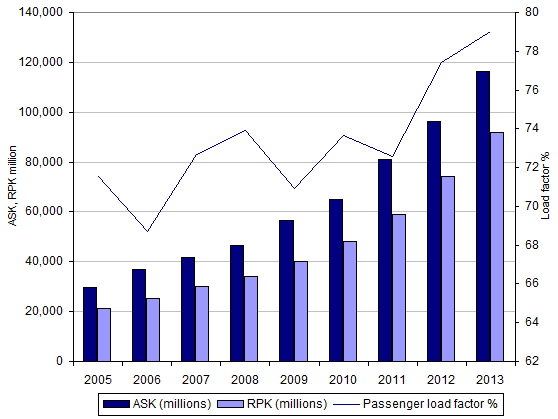 Turkish Airlines’ revenues grew by 27% in 2013, faster than the growth in ASKs, mainly reflecting traffic revenue growth. It was one of the few European airline groups to enjoy strong growth in cargo revenues in 2013, with an increase of 27% (outpacing the 20% increase in cargo and mail tonnes carried).

By region, traffic revenue growth was particularly strong to Africa (+41%), reflecting a strategic focus on expanding its network in that continent, and America (+33%). These are currently THY’s two smallest regions by revenue. Europe, which is its biggest region, accounting for one third of traffic revenues, also outpaced the total, with revenue growth of 29%.

Costs were up 29%, outpacing ASKs and revenues

Operating costs increased by 29%, faster than growth in ASKs and revenues. The biggest cost was fuel (37% of the total) and this increased at the slightly slower rate of 27%. Labour cost growth was contained to 21%, below the increase in capacity and revenues. All non-fuel costs increased by 30%, pushed up by above average increases in landing and navigation costs and by a near quadrupling of short term lease costs (ie wet leases).

Operating cost per ASK increased by 6.8% for the year, with ex fuel CASK up at the faster rate of 7.7%. In USD, costs grew by 21% and CASK was flat (+0.3%) and ex fuel CASK was up 1.4%. The weakening of TRY had the effect of inflating both RASK and CASK when reported in TRY. 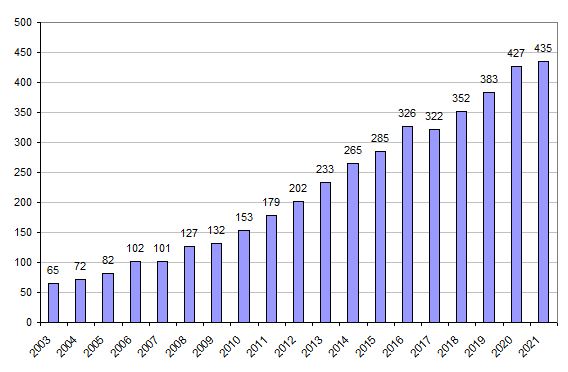 In terms of the outlook for 2014, THY has said that it plans ASK growth of 21% and load factor to be a little lower than in 2013. It expects passenger yields to decline and cargo volume to grow at the slower pace of just less than 16%. Overall, its revenue expectations are for growth of 16% in USD terms (this is likely to be higher in TRY if the Turkish currency continues to weaken). On costs, THY expects ex fuel CASK to be up 2% (in USD; again, this is likely to be higher in TRY) and fuel consumption to outpace ASK growth, with a 23% increase.

THY says that this guidance was valid in Dec-2013, before 4Q2013 results were confirmed and before the macroeconomic outlook changed. Revised guidance has not yet been issued. 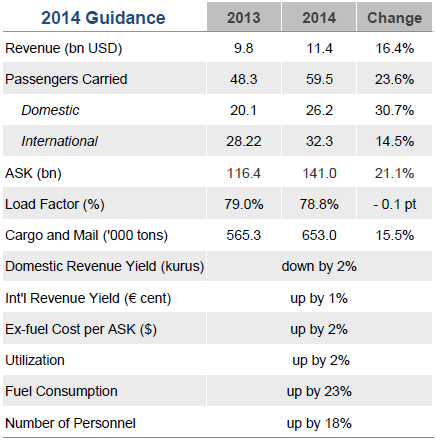 Looking at THY’s track record of managing the balance of unit revenues (total revenue per ASK, RASK) and unit cots (operating cost per ASK, CASK), it achieved its highest operating profit of recent years in 2009, by reducing its CASK. 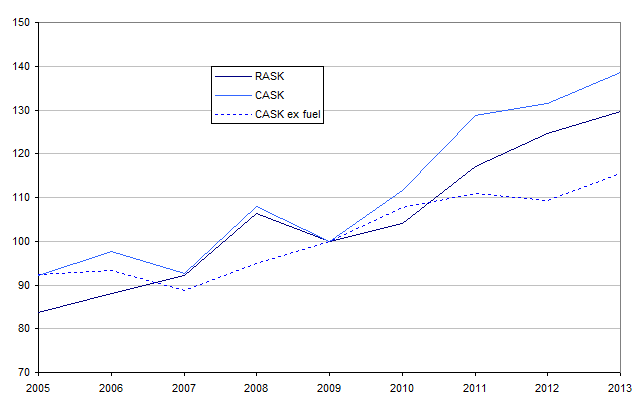 Nevertheless, even expressed in USD, the plain truth is that CASK growth (+13%) has outstripped RASK growth (+6%) since 2009. In 1H2013, this relative performance was positive, but then came a sharp increase in CASK in 3Q2013 (+9% in USD terms). This increase was not repeated in 4Q2013 (when USD CASK was down 3%), but both quarters of 2H2013 saw RASK growth under-perform CASK growth, reversing their relative development in 1H2013.

The carrier’s current published guidance suggests that the weakness of RASK versus CASK will continue into 2014. The guidance, with falling unit revenues and growing ex fuel CASK, already suggests that profit growth will be a real challenge in 2014.

The additional uncertainty surrounding the outlook only makes this challenge all the more difficult.

Turkish Airlines year on year growth in TRY-reported RASK and CASK by quarter: 2013

Turkish Airlines year on year growth in USD-reported RASK and CASK by quarter: 2013