Turkish Airlines, which rose 0.9% on Friday, expects to expand further from 2010. The carrier’s CEO, Temel Kotil, stated he believes now is the right time to further expand, despite the global financial downturn. Expansion plans will focus on the Asia Pacific region, looking to launch services to Australia, China, Pakistan, the Philippines and Vietnam. Turkish Airlines aims to handle 40 million passengers p/a in 2012, after handling 26.8 million passengers in 2009.

Also in Europe, shares in British Airways were down slightly (-0.2%) on New Year's Eve, with Thomas Cook Group and Aeroflot weaker, down 0.5% and 1.2%, respectively. 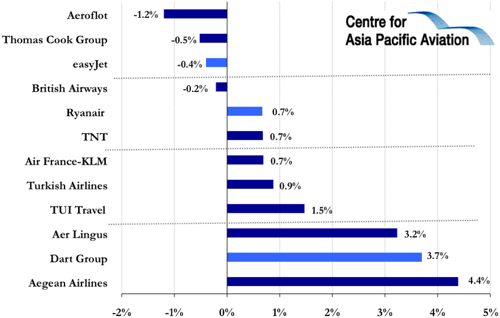