Turkish Airlines and Vueling benefit from traffic results, SAS down

European share markets made gains for the first time in three sessions on Wednesday (13-Jan-2010).

The UK FTSE 100 index (-0.5%) was one of the few down at the end of trading due to pressure on the market by oil producers on weaker oil prices and news Royal Dutch Shell was downgraded during trading. News factory output in the UK stalled for a second consecutive month in Nov-2009 also affected stocks. Despite the drop, British Airways (+0.6%) and easyJet (+2.0%) made gains.

In other markets, France’s Paris CAC was down 0.1%, while Germany’s Frankfurt DAX ended the day up 0.2%.

These reports - and much more - are contained in today's edition of Europe Airline Daily. 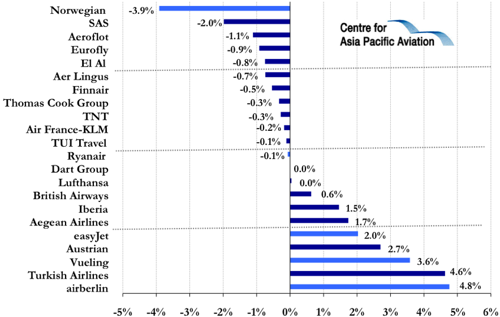