Turkish Airlines steps up next rung on expansion ladder

Turkish Airlines' inauguration of non-stop service between Istanbul and Los Angeles has kicked off the next round of an aggressive long-haul expansion for the carrier.

The LA route, the longest stage length in the carrier’s network, requires 30 hours, or 1.5 aircraft for a round-trip. It is also the first route opened since the introduction of the airline’s new three-class product on its widebody fleet.

Still something of a phenomenon

CAPA and others have reported on the rapid growth of Turkish in the past decade, the outgrowth of changes in Turkey’s aviation sector and resulting in a newly revitalised airline.

The carrier’s initial growth was focussed on what it calls its “neighborhood”, Europe, the Middle East and North Africa, as well as its domestic sector. 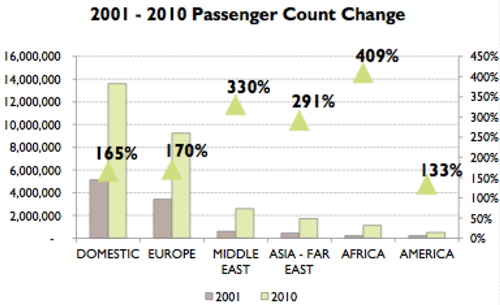 The chart shows how that goal has been met in the first decade of the new century. The airline continues to expand in that sphere – it speaks of ultimately serving 100 European cities, up from 68 now. But the new long-term plan aims to lengthen those green bars for Asia, Africa and the Americas within the next five years.

With the LA service, the carrier takes the first step to significantly expand its presence in the Americas, as eight more cities are evaluated for 2012. Los Angeles has been added to New York, Chicago, Washington and Toronto. While the initial service consists of four weekly flights, the airline plans to increase that to a daily service by late summer, as well as adding a second flight to New York. Flights to Chicago are daily and the schedule to Washington is being increased as well.

Toronto is limited to three weekly services, although the airline would begin daily flights if increased frequencies we granted.

Under consideration is Atlanta, Detroit, Houston, Boston and Miami in the US, Montreal in Canada (also likely to be frequency limited), Mexico City and Buenos Aires. The airline would like to begin Buenos Aires service as an extension of its flight to Sao Paulo, but is encountering problems in getting enough slots at Guarulhos.

Should a number of these cities actually become part of the network, it will outclass even Emirates in frequencies and gateways in the Americas.

A broad base looking towards Asia

As with the industry in general, Turkish also sees the biggest future growth to lie in Asia. It serves 15 cities in Asia and will soon begin flights to Manila. It is also looking at additional points in India as well as expansion to Kuala Lumpur and Oceania.

The airline has also broken from the model set by Gulf carriers in having a large presence in the CIS (14), and Iran (4), providing the majority of international services to many of those points.

A special plan for Africa

While serving 17 cities in Africa, THY is adopting a unique strategy with regards to further growth on the continent. Turkish sees Africa as a market served with aircraft that are too large and with too few frequencies.

In order to rectify that situation, the airline has ordered 10 B737-900s to be especially configured with only 151 seats and dedicated to the African market. By doing so the airline will cut trip costs by 50% as opposed to operating widebody aircraft, allowing a significant increase in frequency and boosting the appeal of Istanbul as a connecting hub. Given the increased interest of China in Africa, THY sees this as the ideal means of tapping this growing, lucrative market.

The aircraft will be dedicated to services to Dakar, Accra, Lagos, Kinshasa, Nairobi and Dar Es Salaam.

Transfer passengers and the limits of IST

All of this growth is contingent on a steady increase in the transfer traffic at Istanbul, which despite a 352% increase between 2005 and 2010, at about 30+% still lags the numbers of most primary connecting hubs. They would like to move that number to about 60%

However, the facilities at Istanbul’s Ataturk Airport are already stretched and a planned new airport is five to seven years away. Improvements in ATC and ground infrastructure have moved the airport’s movements per hour from 40 to 50. They believe that with a bit more tweaking, that can be increased to 60. However, the need for an expanded facility is becoming acute and could be one of the major roadblocks to short-term growth.

Growth in a flat world

On the plus side, unlike the Gulf, there is no real shortage of staff and the carrier has a large contingent of ex-pat flight crew, drawn by good salaries and Istanbul as an appealing domicile.

The airline shows incredible growth in comparison with its AEA peers, growing steadily amidst a sea of flatness. 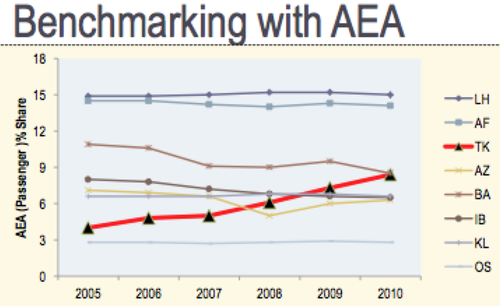 With a EUR5.7 cent CASK, due in part to a 64% increase in productivity between 2005 and 2010, the carrier has the lowest costs within its competitive group. All of these factors have combined to produce a succession of profitable years since the company’s rebirth in 2001/02. Though exact numbers are not yet released, the airline will also post a profit for 2010.

While Turkish weathered the recession better than many of its competitors, the airline is not immune to the effects of starkly increased fuel prices which may significantly affect the bottom line result for 2011. CEO Temel Kotil stated he was far less concerned with fuel spikes as they were a pain shared by all and that, with equal disadvantage, Turkish would still outperform.