With its 3Q2014 results, Turkish Airlines (THY) has returned to a path of improving underling profitability after four quarters of year on year declines. Not only did RASK growth turn positive once more (after falling for five quarters), but also CASK was held flat.

The better RASK trend appears to reflect slightly slower capacity growth. THY has also recently lowered its FY2014 growth plan, which should be positive for unit revenues. Although 9M underlying operating profit was slightly down year on year, the return to profit growth in 3Q raises the prospect of THY's recording an increase in its FY2014 result.

THY is more profitable (by pre-exceptional operating margins so far in 2014) than any of Europe's Big Three legacy airline groups. It has developed a hub strategy that allowed it to carry more international to international transfer passengers in 2013 than Etihad carried on its entire network, with particular strength in attracting European passengers into its Asia, Middle East and African networks. Complemented by a sizeable domestic and point to point international market, THY is certainly capable of delivering annual profit growth.

Although Turkish Airlines' currency for its statutory accounts is TRY, its functional currency is USD and we base this report on USD figures presented by the company.

THY reported an 80% increase in net profit to USD635 million in 3Q2014, although this was flattered by significant foreign exchange gains in the financial income line. Underlying profitability is better represented by the operating profit, which increased at the lesser rate of 22% to USD536 million in 3Q2014, although the fall in profit in 1H meant that the 9M operating result was just below last year's at USD641 million (-0.6%).

Turkish Airlines' 3Q operating margin rose by 0.9 ppts to 16.1%, but its 9M margin fell 1.2 ppts to 7.5%. This puts it at the top end of the range of European legacy groups, but with lower margins than Ryanair, Turkish LCC rival Pegasus and Aer Lingus.

ASKs up 14.0%; highest growth in Far East and America

THY increased total ASKs by 14.0% in 3Q2014, with RPKs just edging this with 14.5% growth and load factor gaining 0.4 ppts to 81.1%. Domestic ASKs grew at the much slower rate of 4.6% as Eastern Turkey showed vulnerability to the geopolitical environment in neighbouring regions.

The region with the highest ASK growth (+21.6%) was the Far East, although unit revenue here was also the weakest. THY's capacity to the Americas increased by 19.6% and to Africa by 16.5%, with new routes in both regions. Growth in Europe and CIS was more modest 9.3% as growth in Central Europe was dampened by the impact of instability in Ukraine.

THY's 3Q ASK growth was slower than the 19.3% increase in 1H, bringing THY's 9M2014 capacity growth to 17.4% (matched by RPK growth). Both domestic and international ASKs grew at a similar rate for 9M. 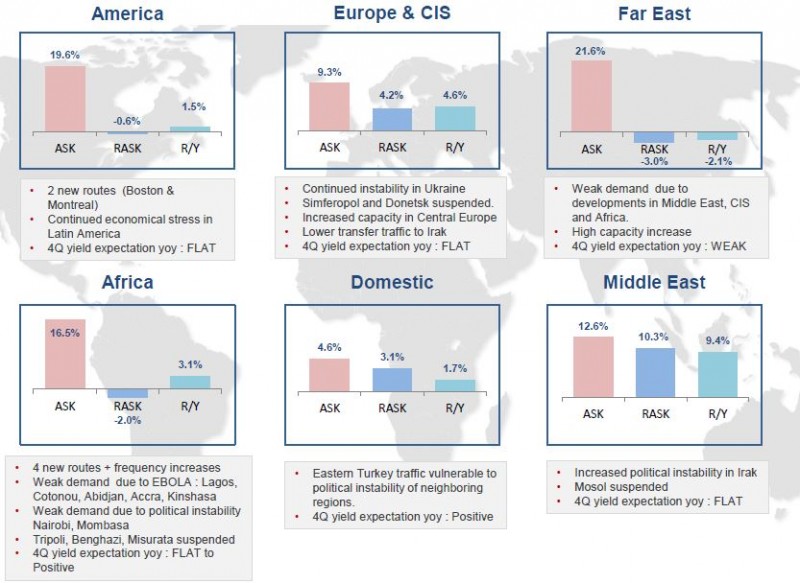 The success of THY's strategy to attract global transfer traffic flows, in competition with the Gulf carriers, can be illustrated by comparing this with the 2006 level of 20%. In 2013, 11.6 million passengers flew with THY only to make an international to international connection through Istanbul. This was slightly more than the 11.5 million passengers carried by Etihad on its entire network in 2013. 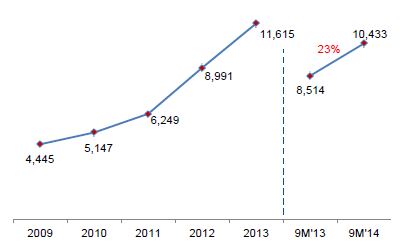 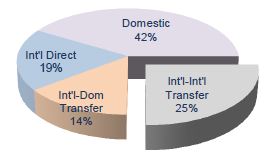 Growth in scheduled flight revenue (passenger and cargo combined) was highest in the Middle East (+26.1%), which also had the strongest RASK growth, followed by the Americas (+18.9%) and Far East (+16.2%).

RASK was also up in Europe and the domestic market, but fell in the Americas, Africa, and (most heavily) the Far East. Unit revenue weakness in Latin America was also reported by Air France-KLM, Lufthansa and IAG in 3Q2014, reflecting strong competitor capacity growth and what THY referred to as "continued economical stress". Africa unit revenues were aversely affected by Ebola and geopolitical events, but THY does not plan to decrease its presence in Africa.

THY attributed unit revenue weakness in the Far East to events in Middle East, CIS and Africa (which generate significant connecting traffic with the Far East), but its own high capacity growth is also likely to have contributed. 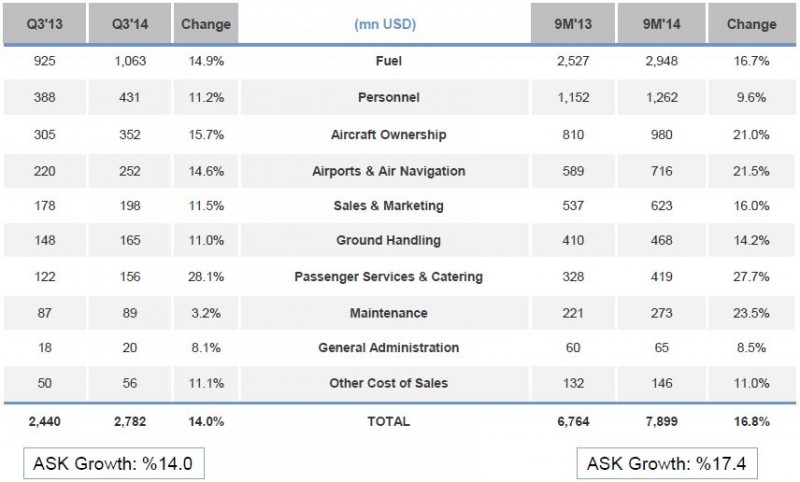 The growth in annual seat capacity of the fleet implied by the plan suggests that the coming years will be characterised by lower growth rates than in recent years, although the plan may be subject to revisions. In particular, THY has for some time been considering a further wide body order and so the wide body numbers could be revised upwards.

The balance of its fleet is always likely to remain skewed in favour of single aisle aircraft, since more than 40% of global international traffic is within narrow body range of Istanbul, but it has long been pondering an order for additional long haul jets. A larger long haul fleet will give it a platform to pursue new markets in the Far East, southern Africa and the Americas.

Turkish Airlines has not given profit guidance for FY2014, but it lowered its fleet and traffic targets in Oct-2014. Its target for total passenger numbers in 2014 is 55.6 million, which is down from 59.6 million planned at the start of the year. This new target represents year on year growth of 15%, similar to the 14% achieved in 9M2014 and much less than the growth of 23% implied by its previous target.

ASK growth is now planned to be 17%, versus 19% previously. The lower traffic guidance was mainly due to changes in the domestic capacity plan of Anadolujet, with minimal impact on THY's revenue and profitability targets, according to a company statement in Oct-2014.

The lower growth target still means double digit growth, but should help to consolidate THY's unit revenue performance. Slower capacity increases in 3Q compared with 1H appears to have helped it to return RASK to growth after four declining quarters.

Moreover, THY also managed to keep CASK flat (it grew in 2Q), so that RASK outpaced CASK for the first time since 2Q2013. Its challenge now is to keep CASK down and falling, while maintaining upward momentum in RASK.

THY has a track record of growing RASK faster than CASK. Moreover, its lower growth outlook, driven more by frequency than by new routes, its global network and its well rated brand should all support RASK in the future.

A return to an annual profit growth path looks possible.