TUI Travel (+7.3%) shares rocketed higher on Thursday (02-Dec-2010), leading the rise in European airline shares for the day. The company was up after reporting a 4.0% year-on-year improvement in profit before tax to GBP337 million, for the 12 months ended 30-Sep-2010. However, it reported a net loss of GBP104 million for the period, compared with a restated loss of GBP66 million in the previous corresponding period.

Operating profit was also up for the year, rising 11% to GBP447 million, despite a 2% decline in revenue to GBP13,525 million. Underlying operating profit and underlying profit before tax are from continuing operations and exclude separately disclosed items, amortisation of acquisition-related expenses, goodwill impairment and taxation of results of the group’s joint ventures and associates. Underlying profit before tax also excludes separately disclosed financial expenses. TUI attributed the losses to a weaker operating environment in the UK.

Shares also rose after the company reported a 27% year-on-year increase in winter bookings from 21-Oct-2010 to early Dec-2010 in Nordic countries, a 2% rise in the UK and a 9% rise in Germany.

Lufthansa upgraded by another analyst

Lufthansa (+3.1%) also gained for another day after Citigroup raised its price target for the carrier’s shares from EUR19 to EUR25.50. It maintained a "buy" rating for the carrier. Citigroup attributed the raise to “improving traffic and revenue conditions” and “enhanced dividend prospects”.

Finnair (-0.8%) was one of the few carriers to decline for the day as cabin crew strike action continued. The carrier stated it now expects to operate 40% of regular passenger traffic in coming days as some cabin crew have returned to work.

Finnair operated approximately 30% of its flight schedule, and plans to increase it to 35% on 03-Dec-2010. The dispute, with members of the cabin crew union SLSY, is over the airline’s plan to cut rest time between long-haul services from 36 hours to 24 hours. The union began a strike over a wage deal on 30-Dec-2010, forcing the carrier to cancel more than 500 flights so far. 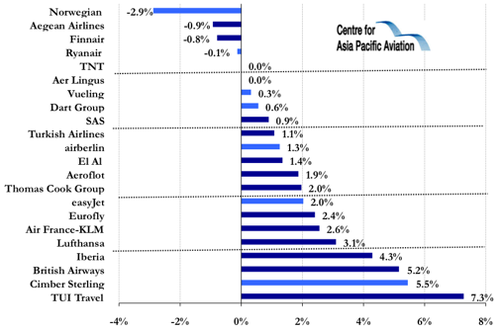