Shares in TUI Travel (-11.0%) slumped after the carrier’s audit for 12 months ended Sep-2009 found a further GBP88 million in irrecoverable balances that need to be written off, resulting in a total write down of GBP117 million. The issue was the result of faults in integrating computer systems.

TUI AG stated the writeoffs “will not have a negative impact on the TUI Group’s cash position and hence net debt,” adding that TUI AG’s earnings forecast for the tourism segment in 2009/10 “remains unchanged".

The decline was despite Germany’s DAX (+1.4%) rising to its highest level since Jun-2008, after Germany's Economy Ministry stated it expects the economy to grow in 2010 at the fastest pace since 1999 when GDP grew 5.1% following reunification. The government is raising its forecast as exports to China and other Asian countries increase and consumer spending returns to growth. GDP is expected to increase by 3.4% in 2010 and 1.8% in 2011, compared to previous forecasts of 1.4% for 2010 and 1.6% for 2011.

British Airways (+0.9%) gained after Commerzbank stated it expects the airline to benefit from a “dynamic rebound in the revenue environment” and achieve its most recent guidance of breaking even at the profit before tax level for FY2010. Commerzbank rates the airline as ‘Add’, with a target price of GBP 320 pence.

BA also gained on confirmation cabin crew are to vote on a new contract offer. Union, Unite, stated the revised contract offer includes a commitment to reinstate withdrawn staff travel benefits by 2013. The carrier was also up following improved earnings results from major carriers in the US. Trans-Atlantic partner, American Airlines, reported its first quarterly profit since 3Q2007. 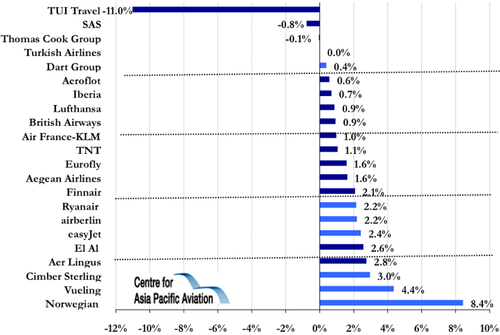