Shares in TUI AG rose again yesterday (by 8.8%), as Reuters reported the company plans to swap debt for parts of its 51%-owned TUI Travel business. TUI AG reportedly plans to acquire TUI Travel's central European operations in return for a cancellation of some of the debt owed to it by TUI Travel.

Staying in Germany, Air Berlin shares were 5.5% higher as Russian billionaire, Alexander Lebedev, stated Dusseldorf-based Blue Wings would “probably file for bankruptcy” after Germany’s aviation authority, LBA, announced on 31-Mar-09 that it had terminated Blue Wings' license. Air Berlin however faces the prospect of pilot strike. Yesterday, over 80% of its unionised pilots represented by the Vereinigung Cockpit union voted in favor of a walkout as they push for higher pay rates. 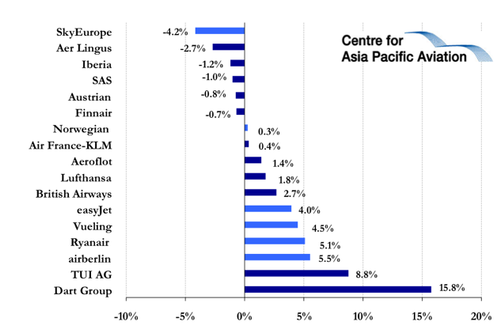