TransAsia Airways placed a firm order with Airbus for six A321neo aircraft on the second day of the Paris Air Show on 21-Jun-2011, a day which saw the manufacturer sign orders for 121 passenger jets with four different airline and leasing companies.

The Taiwan-based carrier, which has recently celebrated its 60th anniversary, stated the new aircraft would enable it to respond to strong growth on regional services, especially on direct routes between Taiwan and mainland China.  The aircraft will also reportedly be deployed on other new international services, including services to Singapore, set to be launched this month. This forms part of the carrier's plans to expand its activities across Asia, with the latest fleet order to fulfill its growth requirements. The carrier has reported improved financials in 2010 and 2011, buoyed by its international network, particularly cross-Straits services to China.

TransAsia will announce an engine selection for the new aircraft, valued at around USD600 million at list price, in the near future. The new engines types offered on the A320neo family are CFM International’s LEAP-X and Pratt & Whitney’s PurePower PW1100G. TransAsia Airways operates a feet of five A321s, two A320s and nine ATR72-500s on domestic and regional services at present, based on Ascend data.

In addition to the new order, the airline already has six sharklet-fitted A321s and two A330-300s, ordered in 2010, on order. These aircraft are scheduled for delivery from Nov-2012 to 2016. In May-2011, TransAsia Airways Chairman Vincent Lin, quoted in China Times, stated the carrier would place an order for 12 aircraft, including the six A321neo aircraft, within the year, to support growing demand, especially on cross-Strait services.

Earlier in Jun-2011, Reuters reported that TransAsia Airways was seeking a 10-year TWD6000 million (USD209 million) loan to finance the purchase of two A330-300 aircraft. TransAsia Airways Chairman Vincent Lin has previously stated the carrier is preparing for an IPO at the end of the year. No further details have been provided.

TransAsia Airways GM Charles Chen earlier this year stated the carrier’s profitability in 2011 could be similar to its 2010 profit of TWD918 million (USD31.7 million).

For the first three months of 2011, the carrier reported an after tax profit of TWD130 million (USD4.5 million), according to reports in China Times, with profits expected to continue in 2Q2011. Profits were boosted due to higher fares and the opening of cross-Strait services in the second half of last year. The carrier reported TWD1934 million (USD66.7 million) in revenue in 1Q2011, a 8.5% year-on-year increase year-on-year but a 8.3% quarter-on-quarter decline.

TransAsia Airways sales revenue declines 0.8% in May-2011 as traffic weakens 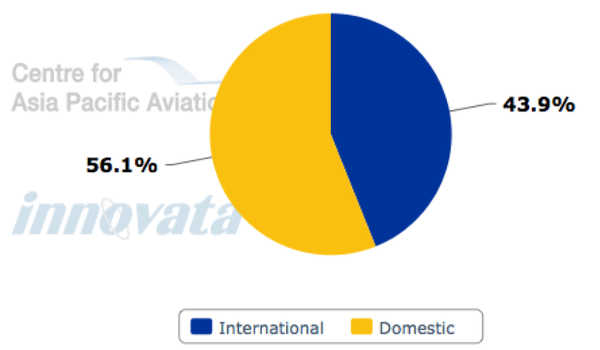 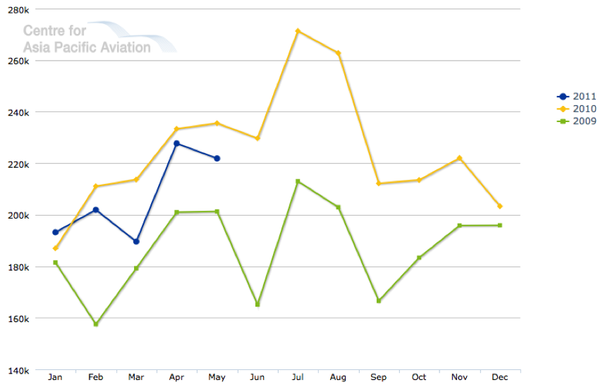 Passenger load factors weakened 3.1 ppts to 76.05%. Domestic load factors remained unchanged at 76.7% while international load factors declined by 4 ppts to 75.8%.  The numbers of services operated declined 2.4% to 2991 in the month. 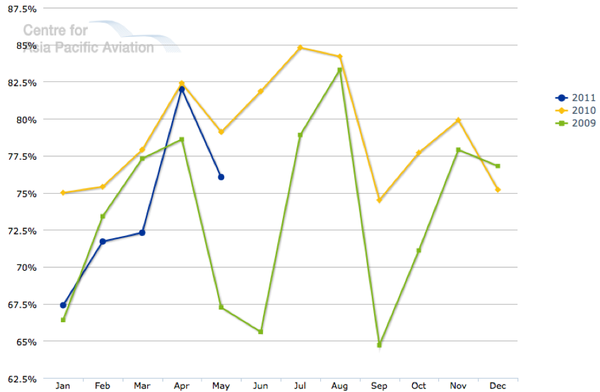 Cargo volume also declined for a fourth consecutive month, by 9.5% to 2635 tonnes. Cargo tonnes stood at 1094 tonnes domestically (unchanged) and 1541 tonnes international (-15.2% year-on-year). TransAsia Air, according to reports in China Times in Apr-2011, is considering entering the air freight transportation market although it did not disclosed any further details. 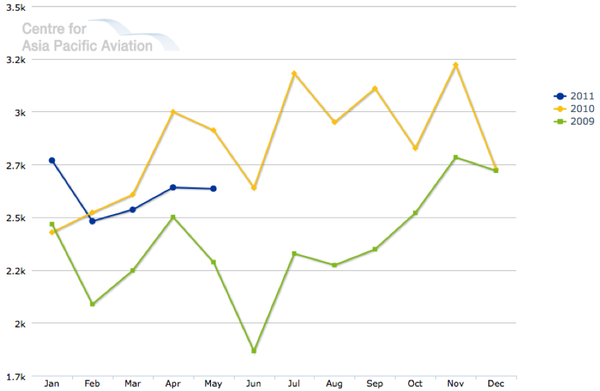 TransAsia Airways, meanwhile, is further expanding its international network in Jun-2011 with new services from its Taipei Taoyuan base to Singapore to be launched on 30-Jun-2011 while Phuket services were launched on a charter basis on 04-Jun-2011.  The carrier mainly focuses on the Taiwanese and Chinese markets but over recent years has boosted its international operations.

Taipei Taoyuan-Singapore is already served by Singapore Airlines, China Airlines, EVA Air, Tiger Airways, Jetstar Asia and SilkAir which together operate more than seven daily services on the sector.  An estimated 702,000 O&D passengers travelled on the route in 2010, a 12% year-on-year increase.

Taipei Taoyuan International Airport to Singapore Changi Airport
(seats per week, one way, 30-May-11 to 11-Dec-11) 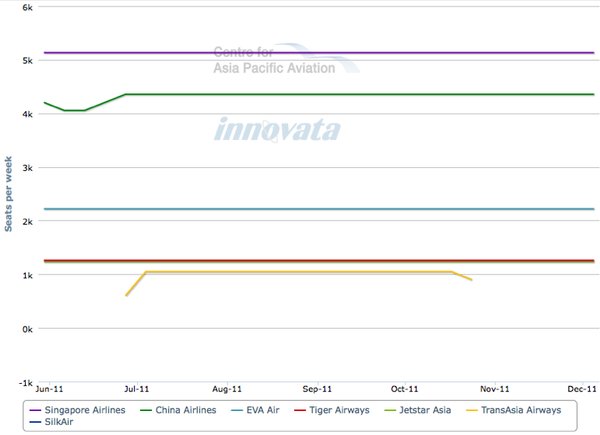 The mix of LCC and network carrier operators have means that yields vary significantly with fares from LCCs averaging around USD190 one way, while the sector average is considerably higher. 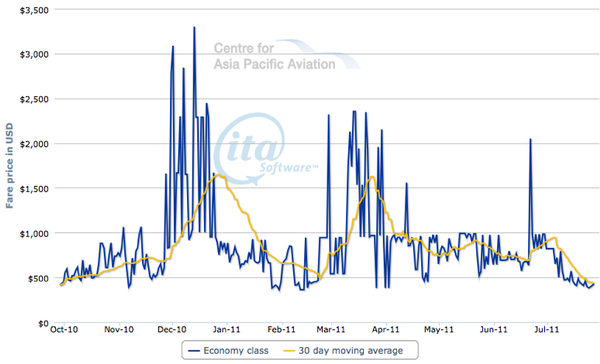 Meanwhile, Taiwan’s Civil Aeronautics Administration (CAA) met with airline representatives on 17-Jun-2011 to allocate the recently added 94 cross-Strait flights. As part of the allocations, TransAsia has been allocated 10 flights including one additional Shanghai flight.

The carrier in May-2011 was also awarded rights to operate cross-Strait services between Taiwan and Wuxi, which is expected to commence in Jun-2011. At the end of 2010, Wuxi, Xuzhou, Quanzhou and Sanya received approval as cross-Strait destinations.  The carrier, meanwhile, commenced codeshare services with Xiamen Airlines on cross-Strait services in Mar-2011 covering Kaohsiung-Fuzhou, Kaohsiung-Xiamen, Taichung-Xiamen and Taipei Sung Shan-Fuz sectors.

After progressive adding cross-Strait services to its network, TransAsia is the sixth largest operator on services between Taiwan and China behind China Airlines, EVA Air, China Eastern Airlines, Mandarin Airlines and Air China. 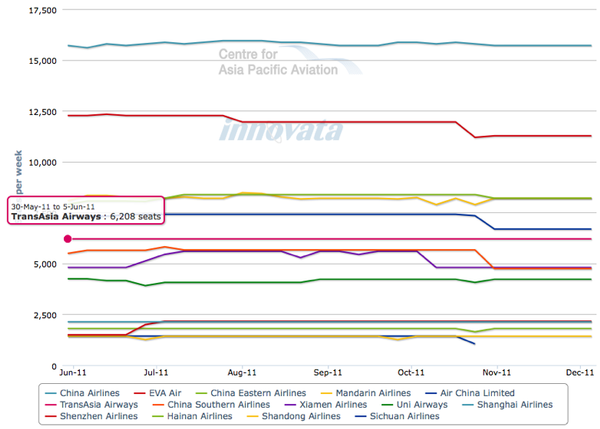