Traffic levels for Europe’s full service carriers have stabilised over the past few weeks, but IATA’s latest financial forecast for the region is dire. In its Sep-2009 forecast, the industry trade body has more than doubled the scale of its expected losses for European carriers from USD1.8 billion to USD3.8 billion.

IATA has cited the destruction of key long-haul markets by the world trade collapse and delays in relaxing slot regulations ("preventing a timely reduction in capacity") as contributing to the revision to its European carrier outlook.

As the global economy slowly recovers, yields are expected to eventually come back, but the declines in passenger traffic are already compounding on last year's falls. Even if passenger numbers continue to rise, IATA states that industry revenues are not likely to return to 2008 levels until 2012, at the earliest.

European traffic is expected to rebound to 3% growth in 2010, lagging IATA’s global forecast of 3.7% growth. However, the consumer and air travel recovery is expected to be much weaker than the world average in Europe, the US and the key trans-Atlantic market, as consumers in these markets have only just begun to reign in their debt, which had supported the previous travel boom.

IATA predicts the red ink will continue to flow for European carriers in 2010. The expected USD1.9 billion European carrier loss accounts for half of the forecast global loss of USD3.8 billion next year.

Can the cost cuts keep coming?

IATA's gloomy outlook for Europe may also reflect the prospect that aggressive cost cuts of the past 12 months may be increasingly difficult to achieve in the future. Some airlines have now completed their initial rounds of restructuring efforts triggered by the onset of the financial crisis, and are now initiating secondary (or even tertiary) cost cutting plans.

However, the early gains from the cost cutting plans may prove harder to repeat. This will be particularly true of staff costs, with an expected backlash by unions against the large scale lay-offs seen in 2008 and 2009. Air France and Lufthansa have recently announced another round of staff reductions, mostly through voluntary measures, but more aggressive employee cutbacks are finding significant opposition.

BASSA, the union representing British Airways’ 14,000 cabin crew, stated last week that improving economic conditions mean staff can “hold firm” and resist the carrier’s attempts to secure a two-year wages freeze and eliminate approximately 2,000 positions. Aer Lingus’ SIPTU is adopting a “wait-and-see approach” following indications of further significant cutbacks at the carrier, with new CEO, Christoph Mueller, warning that the union should expect an "amputation" rather than "cosmetic surgery". The carrier has reportedly been considering cutting up to 500 of its 3,900 strong workforce.

Also on the cost side, the price of oil continues to climb. IATA has forecast a 2010 average price of USD72 per barrel, which is expected to add USD7 billion in costs for airlines worldwide compared to the USD61 average forecast for 2009.

The Association of European Airlines reports that scheduled traffic (RPKs) for its 33 member carriers for the week ended 13-Sep-2009 (Week 37) declined 2.8% year-on-year. Traffic levels have been notably steadier in the first two weeks of September, after worsening over most of August. 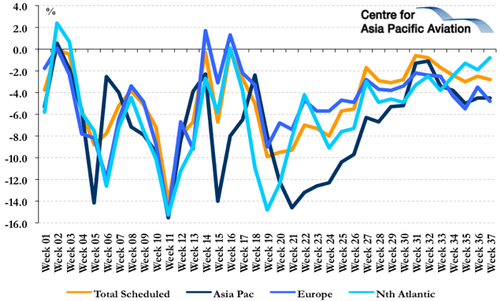 The North Atlantic long-haul market remains the strongest, defying the general trend. Traffic across the Atlantic was down just 0.8%, the best level all year (when excluding the effect of the early Easter this year), although anecdotal evidence suggests yields remain very weak. Asia Pacific traffic has been flat for the past few weeks, down 4.5%. Cross-border European traffic fell 4.8%.

Total capacity declined by 4.3% in Week 37 - the sharpest reduction for almost three months. 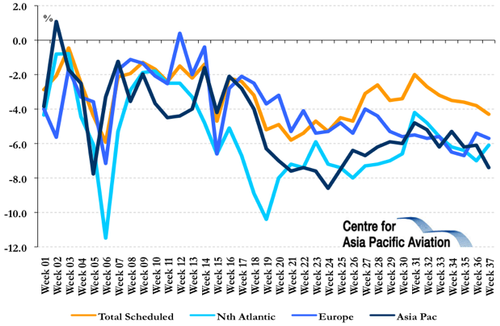 The strongest cut backs have been on Asia Pacific routes, as the long-haul market struggles. North Atlantic capacity was down 6.1%.

After seeing a drop in load factors of several percentage points over the past month, load factors have stabilised again, at just under 80%. The load factor for total scheduled member traffic was 78.3%. 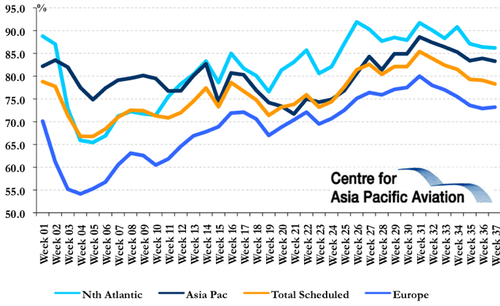 North Atlantic load factors remain strong, mostly due to heavy discounting, at 86.2%, while Asia Pacific load factors are at 83.3%. After dropping most sharply over August, European load factors witnessed a slight uptick in early September, coming back to 73.2%.

For many European airlines, the prospect of the looming Winter period, in the absence of a miracle economic recovery, will be frightening indeed.