Traffic heads back down for Europe’s full service carriers

After demand levels had crept back towards positive territory over the Northern Summer, Europe’s full service carriers appear to be facing another harsh Winter. Traffic levels have slipped back decisively over the past few weeks, as the Summer peak travel period ends. Worse still, the falls are now compounding on last year’s declines, despite aggressive discounting.

According to IATA, there has been some improvement in demand conditions recently, but passengers continue to trade down to cheaper seats in the face of recessionary pressures. Airlines have been forced to continue sales promotions for longer, as they struggle with excess capacity and intense competition.

By contrast, Europe’s stronger low cost carriers, such as Ireland’s Ryanair and Norwegian Air Shuttle, have been reveling in the conditions, reporting double-digit increases in passenger traffic over the past few months.

With KD Avia and SkyEurope going bankrupt over the past few weeks, the spectre of collapse has returned to haunt Europe’s smaller and weaker airlines. EADS CEO, Louis Gallois, expressed his concern at the end of August that airlines have been unable to rebuild their cash positions over the traditionally stronger Summer period.

Even some larger carriers are increasingly vulnerable. 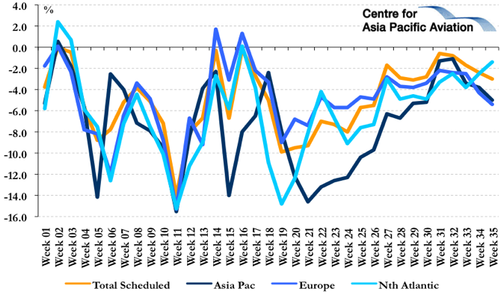 The exception to this worsening demand climate has been traffic on North Atlantic markets. Although still contracting (down 1.4% year-on-year in Week 35), it is displaying some resilience to the general trend and has not undergone the same downward turn as traffic to other regions. (Yields are a different story however). Asia Pacific traffic dropped 5% in Week 35, while cross-border European traffic fell 5.4%, the lowest level for almost three months.

The latest downturn is much more gentle than earlier in the year, as the data is unaffected by the presence of one-offs, such as the early Easter.

As traffic levels have come down, so has capacity, with European full service carriers continuing to make heavy reductions in their flying operations. Encouragingly, full service airlines have been managing to reduce their capacity ahead of the falls in demand for the past two months. 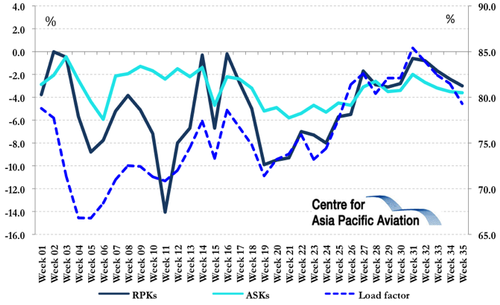 Although demand to North Atlantic markets remains better than most others, AEA carriers cut capacity back almost as severely as other regions, with a 6.4% reduction in Week 35. This compares to a 6.2% cut on Asia Pacific routes and a 6.6% cut on intra-European operations.

Average passenger load factors have dipped below 80%, dropping more than five percentage points over the past five weeks. Overall total scheduled load factors were 79.3%, after topping 85% in Week 31. 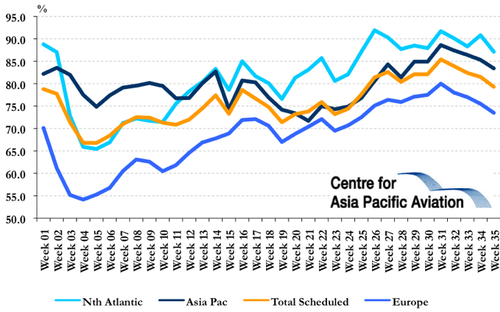