Europe's full service airlines have seen the steep reductions in traffic volumes moderate towards the end of April. Load factors are also much better than at the start of 2009, but still have further to rise (ie capacity levels must fall further) before the pricing environment can be expected to improve.

In the week ended 26-Apr-09 (Week 17), total traffic (RPKs) for the members of the Association of European Airlines (AEA) was down 2.8% year-on-year, after a fall of just 0.2% for the previous week (Week 16). Traffic levels earlier in the month were boosted by Easter.

Cross-border European traffic was down 2.1% in Week 17, with short-haul European traffic continuing to perform better than the longer sectors to/from the Asia Pacific and across the North Atlantic. Asia Pacific traffic was down 6.5% for the week, after an 8% fall the previous week (and a 14% fall in the week prior to that). AEA traffic in the North Atlantic region was down 3.8% in Week 17, after growth of 0.1% in Week 16 (the first positive number recorded since Week 3). 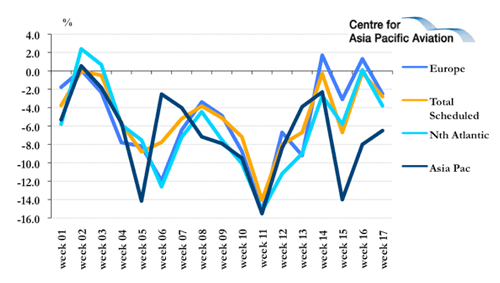 Lufthansa expressed its concern that reduced travel demand over 1Q09 is outweighing other positive factors, such as the fall in fuel prices. With "no sign that demand will pick up any time soon", the carrier expects a decline in full-year revenues, and it could slash long-haul seating capacity by around 8% this year if demand fails to improve. 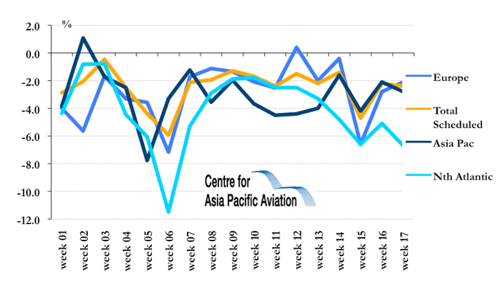 The load factor gains seen last week have levelled off. The exception is intra-European travel, still the weakest in term of load factors, but where load factors were steady, at 71.9%. Asia Pacific and North Atlantic load factors are holding above 80%. 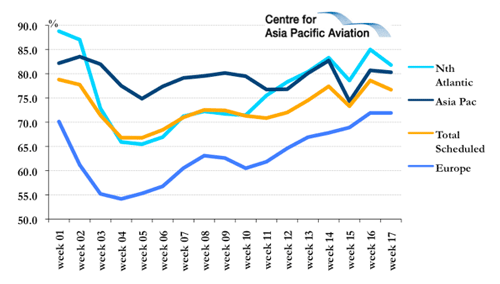 Europe's full service carriers are still unable to match demand to supply, as the falls in traffic continue to outpace attempts to restrict capacity. Still, Apr-2009 should be the best month of the year to date for European carriers, thanks mostly to the later Easter. There are some tentative indications that the slump in passenger demand is moderating, at least within Europe and on the North Atlantic.

The overall outlook for the year remains negative however, with most carriers expecting declines in revenue.

Aer Lingus Chairman, Colm Barrington, commented that the carrier's average fares for 2009 will be worse than previously forecast, associated with a severe deterioration in operating conditions.

SAS Group President, Mats Jansson, was pleased to last week report positive yield growth during 1Q09, but cautioned that Group passenger traffic is expected to decline in 2009 and "the market is extremely unpredictable and uncertainty regarding the time of a recovery commencing remains high". Weakness in GDP is expected to be reflected in weakness in yields.

Unless airlines can move ahead of the curve on the demand-supply equation, cutting capacity and improving load factors, little improvement in the overall situation can be expected, with yields remaining depressed.