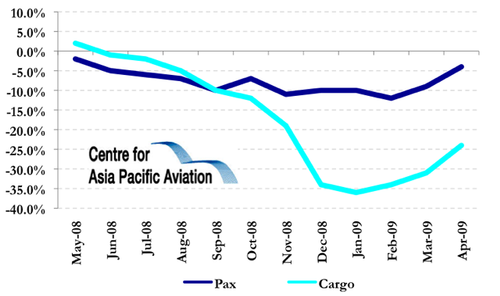 At Kansai, the figures were even more depressed – with outbound cargo shipments down 44% to 18,825 tonnes. Import cargo was 37% lower at 21,495 tonnes. These figures, and the cargo yield data reported by airlines recently, is reminiscent of the decimation of the Japanese cargo market in the late 1980s, which saw a painful retrenchment of capacity and significant restructuring in the segment.

The outbreak of swine flu in Japan (now standing at 364 cases, according to the WHO) has hit travel bookings, prompting a wave of service cancellations. Qantas’ LCC unit, Jetstar, last week announced it has cancelled 31 services to Japan this month, consolidating some Tokyo services to the Gold Coast and Cairns and reducing Gold Coast-Osaka frequency. The carrier warned the cutbacks could extend past Jun-2009, if demand weakness continues.

This is certainly occurring in the case of EVA Air, which confirmed on Friday that it would suspend some of its flights from Taipei to Kansai/Chubu/Fukuoka/Sapporo, as well as Kansai-Los Angeles services until 24-Oct-2009, due to a decrease in demand caused by the outbreak.

Japan Airlines enjoyed its best ‘Golden Week’ holiday period in several years, reporting a 3.9% rise in international passengers and a 0.8% year-on-year rise in domestic volumes. JAL remains the largest carrier at Narita, with roughly a 21% share of frequencies and seats.

All Nippon Airways has a much higher frequency share (19.3%) than seats (14.5%), reflecting its profile of operating smaller aircraft on a predominantly short/medium haul network. Delta Air Lines’ merger partner, Northwest Airlines, is next largest at Narita, with a 10% capacity/frequency share. Northwest is twice as big as United Airlines, which has a 4.9% frequency share, but higher capacity share at around 6.2%. 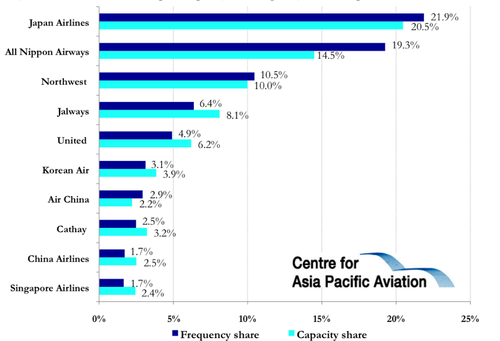 Services to Incheon in South Korea account for almost 8% of total capacity (and a higher proportion of frequencies), while Taipei (7.2%) and Hong Kong (5.3%) are the next busiest city pairs from Narita. 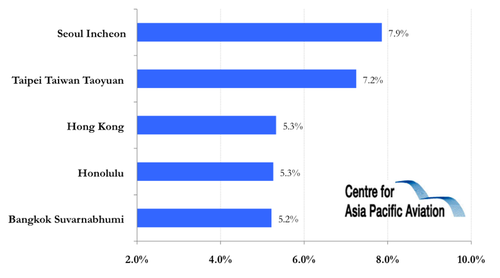 Six weeks ago, Narita Airport officials would have been hopeful of a recovery in volumes, albeit slow, as the year progressed. But swine flu has added another negative element to a fragile outlook for the Japanese economy and aviation sector. It could be several months before a clearer picture emerges.