Tokyo Narita International Airport has released its business plan for fiscal year 2010 (which commenced on 01-Apr-2009), which includes some bullish expectations of a recovery in freight volumes over the course of 2009.

The airport expects cargo volumes to increase by 1.5% this financial year, after a 15% reduction in the 12 months ended 31-Mar-09. (The Association of Asia Pacific Airlines stated on Friday that it sees “no sign of any uptick in demand that might signal the beginnings of a recovery process”). 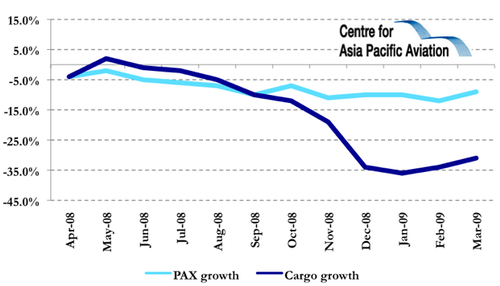 The improved outlook comes as the airport’s operator, the New Tokyo International Airport Corporation (NTIAC), reports it expects a 4% year-on-year increase in passenger numbers during this year’s Golden Week holiday (24-Apr-09 to 07-May-09) to 960,000. The most popular destinations are short-haul, such as South Korea and Guam, and factors fuelling the travel increase are lower fuel surcharges and the strong yen.

JAL Group last week reported international passenger bookings during the "Golden Week" were up by 9.1% year-on-year to 324,234 in total. The forecast seat load factor is 77%, up 11.4 ppts. JAL stated passenger reservations to destinations in China, Hawaii and South East Asia during this period have seen a significant increase by 33.1%, 14.2% and 17.4%, respectively. JAL added, “the load factors on Hawaii and South Korea routes are positive, albeit the slight increase in seat capacity. The forecasted load factor of JAL's trans-Pacific flights also saw improvement after the downward adjustment of seat capacity by 15.3%”.

JAL Group plans to operate 51 additional flights on international routes, including charter flights, to accommodate demand for travel to such destinations as Honolulu, Guam, South Korea, Palau, Bali and Saipan.

Meanwhile, Delta Air Lines is boosting its capacity to Narita, adding daily service from Atlanta with former Northwest B747-400 aircraft from 04-May-09. The service will continue to Ho Chi Minh City.

Delta CEO, Richard Anderson, stated last week that the carrier had “spent a lot of time” on its Pacific strategy, “taking the strength of the Delta network and hooking it to that Pacific network”. He added the carrier’s hub in Narita “becomes very valuable because overflies, particularly from Asian carriers, have significantly diminished”.  The carrier also stated that United Airlines had decreased its reliance on Narita over the years.

Anderson explained, “we operate a classic hub in Tokyo and all points in the US connect to all of the major cities in Asia with the minimum connect time of probably an hour and a half. [We have] looked at the options in an environment where a lot of people have pulled out point-to-point capacity over the transpac - and remember, point-to-point capacity over the transpac is very expensive because unlike Europe, it takes two airplanes. You can’t do over and back in a 24-hour period".

Delta is restructuring its freighter network in Asia, as it grounds its B747-200F fleet amid falling demand. Mr Anderson stated it would retain its slots at Narita, noting the carrier would be “reallocating that capacity”. He added, “given the opportunities that we have in the combination passenger/cargo business, we will have a good ability to utilise those slots. Already we’ve added Salt Lake City to Tokyo, we’ve added four additional flights from Atlanta to Tokyo, and we’ve added JFK to Tokyo, and we’ve added an additional spoke from Tokyo to Ho Chi Minh City. So there are plenty of opportunities…And the freighters have been gradually pulled down and we’ve been reallocating those slots to much better opportunities in terms of revenues and profits”.

NTIAC meanwhile announced earlier this month that it plans to complete the extension of its second runway by Oct-2009, instead of by the end of Mar-2010. Clearance to bring forward the opening of the extended runway still requires Ministry of Land, Infratsructure, Transport and Tourism (MLITT) approval.