Tokyo Narita International Airport aims to expand its annual takeoff and landing slots to 270,000 from 200,000 by the end of FY2012, ending Mar-2013. NIAC Corp decided on the target in a midterm management plan for fiscal 2010 to 2012, in a move to counter rising competition from Tokyo Haneda Airport, which opens a new fourth runway later this year, providing capacity for a raft of new international services - Narita's core market.

The midterm management plan for Narita includes a total of USD280 million in investment for upgrading airport facilities, such as taxiways and aircraft hangers. The operator also hopes to ease curfew restrictions on late-night and early-morning flights.

Meanwhile, Japan’s Ministry of Land, Infrastructure, Transport and Tourism (MLIT) is reportedly considering plans to construct a fifth runway at Tokyo Haneda Airport, with the Ministry is currently assessing the cost and requirements for the additional runway.

Earlier this year, Continental Airlines, United Airlines, Delta Air Lines, American Airlines and Hawaiian Airlines separately submitted applications to the US Department of Transportation to provide services from select US destinations to Tokyo Haneda Airport. The carriers are seeking rights under the Dec-2009 Japan-US open skies agreement, which is anticipated to come into force later this year. The open skies agreement would provide US airlines access to Haneda, with its close proximity to Tokyo's central business district, for the first time in over 30 years.

Also in the North Asian region yesterday, shares in Beijing International Airport led the way down, closing 4.3% lower, while Xiamen and Shanghai airports were down 0.9% each.

To keep up to date on Tokyo Haneda and Narita Airports, including further news on their slot allocation plans, subscribe to Airport Business Daily today! 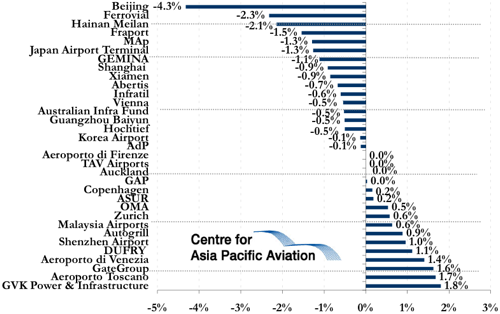