Frankfurt Airport dates to 1936 when it was established as an airship base, second in Germany only to Berlin’s Templehof. In 1955, with the re-emergence of Lufthansa as the national carrier, FRA began its transition to civilian use and in 1958, following the construction of Terminal 1, began its life as an international hub.

This is the ninth in our series of reports on the world's busiest airports, featuring Germany’s primary airport, Frankfurt, utilising the data now available on the CAPA profiles covering some 3,000 airports worldwide.

Your window to the world! Search for airport names in the Red Profiles boxes on the CAPA site

While FRA is number 3 in Europe, behind London Heathrow and Paris Charles de Gaulle, Germany’s aviation clout is reflected in the fact that it is the only country besides the US and China with more than one airport in the global Top 30—Munich, yet to come.

As might be expected, Lufthansa is the airport’s prime tenant supplying about 63% of the airport’s weekly lift, according to Innovata. 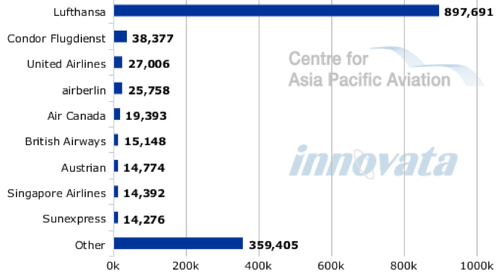 As might be expected, Star is therefore the dominant alliance at the airport with both SkyTeam and oneworld having a very slim representation. We will see the same kind of dominance by Star at Munich and the problematic weakness of the other two alliances in Germany, a gaping hole given its population and economic clout. 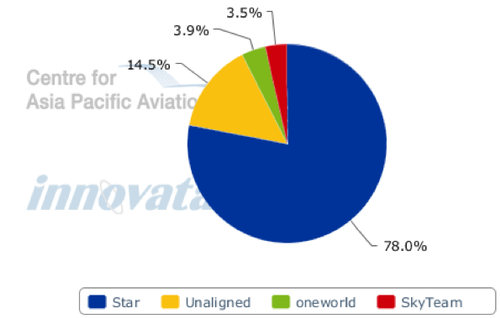 Air Berlin is slated to join oneworld in 2012, but that addition will bring limited improvement at Germany's two main airports, as the carrier’s operations are headquartered in Dusseldorf. Air Berlin's Frankfurt flights operate primarily to Spain’s sun destinations.

Similar to LHR, CDG but with a big difference

As was the case with the other two large European hubs, a sizable chunk of the seats is deployed within Western Europe. And, as was also the case at the other two, North America, predominantly the US, is second. But the number of seats to North America is the smallest of the three.

Yet there is a bigger story behind those numbers in that Lufthansa, along with Star partners, enjoys a market dominance that is absent at both other hubs. Given that Germany is the EU’s economic powerhouse, there is an advantage that lies beyond seat numbers. 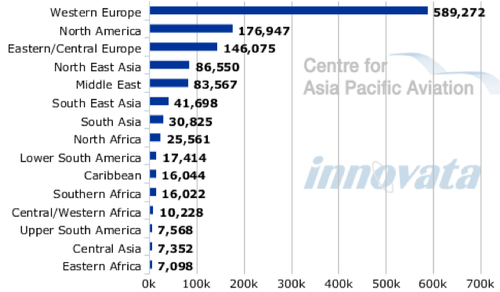 To illustrate the point, we have included an extra chart that provides stark evidence of the unique position that Star and Lufthansa have with regards to US links.

US nonstops from FRA

Given the fact that the other alliances lack a German partner, service to the nation is limited to only a few flights from some of their hubs. American has a single daily flight from DFW, but no service at all from JFK, ORD or MIA. Delta operates daily from ATL, DTT and JFK but the JFK flight uses a B757—certainly a small drop in the New York market.

Aside from the DFW flight, the only other oneworld presence in the German market is a daily Air Berlin service to Dusseldorf on which America places its code. SkyTeam (DL) flies from Atlanta to Munich, Dusseldorf and Stuttgart, giving it at least a toe-hold in the market, but essentially Lufthansa and Star dominate the German market from the US. And with Air Canada as yet another Star partner, that predominance extends to Canada as well.

Just shy of 86% of all seats between Germany and the US are provided by Star carriers. While we have seen numbers like that for individual US airports, this dominance of a national market is quite unusual and reflects a stunning weakness in the networks of SkyTeam, and especially oneworld.

And, because Frankfurt boasts a huge global network tied to the German hub, the Lufthansa/Star dominance can be used to feed onwards services across Europe and beyond.

Of the three largest European airports, FRA boasts the greatest percentage of domestic seats at almost 12%. 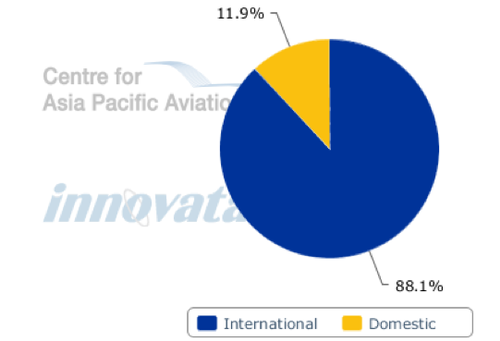 Another similarity with LHR and CDG is the very small LCC presence at the airport, giving added strength to the network operators and perhaps indicating an O&D market at Frankfurt that is unable to sustain a broad LCC challenge or unwilling to pay the airport charges.

However, the German market in general supports a significant low cost presence with many of those services centered at other German airports. 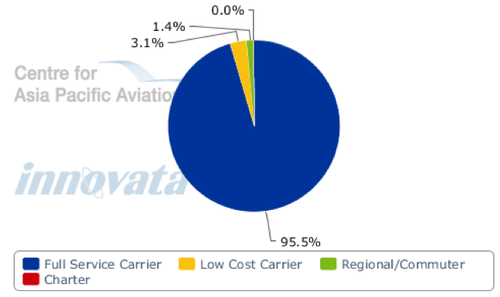 Our moving average fare data for Frankfurt-New York reveals a low of USD608 (just under $.08 per mile) and a high of $2008 ($.25), with the general average running nearer the lower end than the higher. Click here for Frankfurt fares data.

So despite Star’s dominance, the average fare per mile is below that ex-Paris and London. Again, the savvy shopper should be able to travel reasonably throughout most of the year, if plans are flexible.

Given the fact that these three European hubs all vie for the same connecting traffic, it is no surprise that the general fares levels are comparable.

Frankfurt is in the process of adding a fourth runway—this one dedicated solely to arrivals, enabling the airport to keep pace with its growth. However, the geographic footprint of the airport is constrained and for that reason, Munich was built as an alternative German point of connection.

As we shall see when we cover Munich in detail, many of the routings possible over Frankfurt are duplicated at Munich, allowing Lufthansa to cater to market needs with an alternative transfer point. Frankfurt may be Lufthansa’s primary hub but the network structure is actually a dual-airport creation.

With Heathrow apparently limited to its current configuration, the real focus of expansion in Europe will centre on Paris and the two German hubs where growth and capacity will continue to be accommodated.