The International Air Transport Association (IATA) reported international scheduled traffic (RPKs) rose 2.1% year-on-year in Nov-2009, while freight demand recorded a 9.5% improvement. Director General and CEO, Giovanni Bisignani, stated, “demand continues to improve, but we still have a lot of ground still to recover”. He added, “we cannot anticipate any significant improvement in yields in the coming months, so conserving cash, controlling costs and carefully matching capacity to demand remain at the keys to survival”.

IATA noted that passenger load factors were still at pre-crisis levels of 75.4% in Nov-2009, while freight load factors stood at just 56.6%.

Comparing to October (and adjusting for seasonality), passenger demand in November actually fell by 0.7%, primarily due to continued weakness in North America and Europe. The Conference Board stated the recent slowing of the trend in the Euro Area’s Leading Economic Index “reinforces concerns about a fragile recovery” in that region, while concerns persist about the strength of the US economic recovery.

Asian air traffic growth is driven most directly by economic recovery (with the exception of Japan), while Asian economic growth is fuelling strong demand for commodities in both Latin America and Africa, according to the airline body.

While Latin American carriers are benefiting with business growth, a 2.1% fall in African traffic indicates a loss in market share. Middle East growth of 16.5% “can also be related to the strength of Asia and the ability of Middle East carriers to facilitate connection traffic to the region through Middle Eastern hubs”. 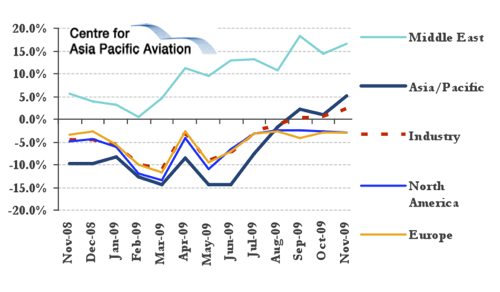 IATA stated the 14.5% growth in freight demand for Asia Pacific carriers in Nov-2009 was “linked to the success of stimulus packages in driving industrial output and broader economic recovery within the region”.

European carriers were the only group to post a drop in traffic, recording a 5.6% fall in demand. This reflects the “lingering economic malaise” in the region, according to IATA. 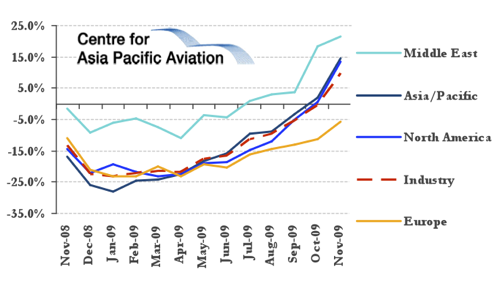