Asia Pacific flag carriers are finally facing up to a major strategic challenge that has been looming for the past decade: the incursion of low-cost carriers into core short-haul markets, as well as bread-and-butter long-haul routes.

Three new LCC start-ups were announced for the region during the week and the moves should be seen as growth opportunities rather than a defensive “rook2” to cover competitors.

The lower-cost-base airlines, with the new demographic of traveller it brings to the skies, is filling a void that the major carriers do not reach and puts the LCC sector on full attack. 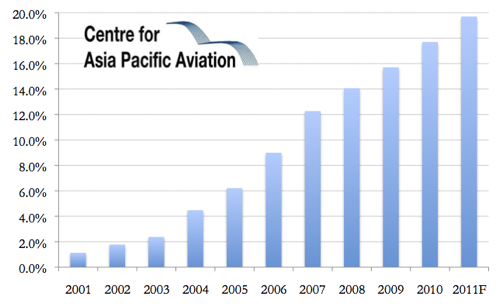 The first LCC off the rank was Peach, what will be Japan’s first full-service low-cost subsidiary airline.

Owned by A&F Aviation, an amalgam of All Nippon Airways and Hong Kong investors Far Eastern, the name was “chosen for its symbolism as a well-known and much loved fruit that symbolises longevity, energy and happiness across Asian countries”.

Peach will operate 10 Airbus A320 aircraft leased from GE Capital, “to tap regional demand for leisure travel including”.

Thailand’s dynamic market is poised for further growth and more intense competition as the country’s flag carrier prepares to launch yet another new airline.

The board of Thai Airways International has approved in-principle the creation of a new regional carrier and while exact business model remains undecided, it has been provisionally named Thai Wing.

The carrier will aim to operate B737s on domestic and international routes starting in Mar/Apr-2012.

Singapore Airlines unveiled a bold new strategy to launch a new long-haul low-cost carrier which should allow the group to better compete against faster-growing rivals and regain some of the market share it has lost to budget airlines.

SIA announced on Wednesday it would establish a new wholly owned low-fare airline subsidiary to launch services within one year and operate widebody aircraft on medium and long-haul routes.

The point is best illustrated in the nexus between AirAsia and Malaysia Airlines results this week.

Malaysia Airlines (MAS) swung back into the red in 1Q2011 and is warning operating conditions remain tough in the current quarter. The flag carrier is seeing a further softening of demand, incurring a MYR267 million (USD88 million) operating loss and a MYR242 million net loss in 1Q2011, reversing profits of MYR290 million and MYR309 million in 1Q2010.

AirAsia has recorded a 52% increase in group operating profit for 1Q2011, fuelled by strong performances in Malaysia and Thailand, despite the rise fuel prices. The low-cost carrier group is confident it can continue turning profits for the remainder of 2011 and is even more bullish on 2012, when it expects a significant improvement in the performance of its Indonesian affiliate and contributions from its planned new affiliates in the Philippines and Vietnam.