Weekly Reflections, with Ron Kuhlmann and the Centre. Headlines on 7-Oct-2009 announced that Central America’s TACA and Colombia’s Avianca were to merge. But behind headline, the back-story is far more intriguing. The actual plan involves quite a bit more than a simple merger - as the Latin American airline market gears up for titanic struggles.

Avianca, as we detailed in our recent SWOT analysis, is owned, along with a number of other airlines and interests by Synergy Aerospace, itself a branch of the Synergy Group, with its primary focus as a Latin American oil and gas conglomerate.

On the other side, the TACA group has been privately owned by the Kriete family since 1961 and they remain the largest shareholders in Grupo TACA Holdings.

The agreement reached in October specifies that Synergy Aerospace was to acquire 2/3 of the Grupo TACA Holdings with the remaining third continuing to be held as at present. According to a presentation released at the time of the announcement “the shareholders have defined that the corporate governance of the company will be based on consensus”.

But like Avianca and its widespread interests, Grupo Taca is a complex entity. With a history dating to 1931, aviation historian R.E.G. Davis has said that, “there has never been an airline quite like TACA anywhere in the world”. Its current form represents an interesting evolution that remains unique.

While the Kriete family purchased the Salvadoran portion of the airline in 1961, it was not until 1983 that El Salvador became its base. This despite the fact that El Salvador was wracked by Civil War from 1980 to 1992. Nonetheless, in the midst of political upheaval, the family invested heavily in the airline and its infrastructure.

Federico Bloch, a now-famous name in the region’s aviation history, took control as CEO and recruited managers from a number of established carriers. Simultaneously, in 1989, the team began to invest in five Central American carriers: TACA International of El Salvador, LACSA (Líneas Aéreas Costarricenses) of Costa Rica, AVIATECA (Compañía Guatemalteca de Aviación, S.A.) of Guatemala, TACA of Honduras, and NICA (Nicaraguenses de Avación) of Nicaragua. These carriers formed and remain the nexus of the TACA group.

But full integration proved to be complicated and the group’s operation under a single logo was not realized until 1997. In 1999 a new affiliate, TACA-Peru, was added. Further blurring the lines between brands, in 1998 TACA had joined Brazil’s TAM and Chile’s LAN in a combined order for 175 Airbus aircraft. Interestingly, over time those aircraft have increasingly been in competition with each other. 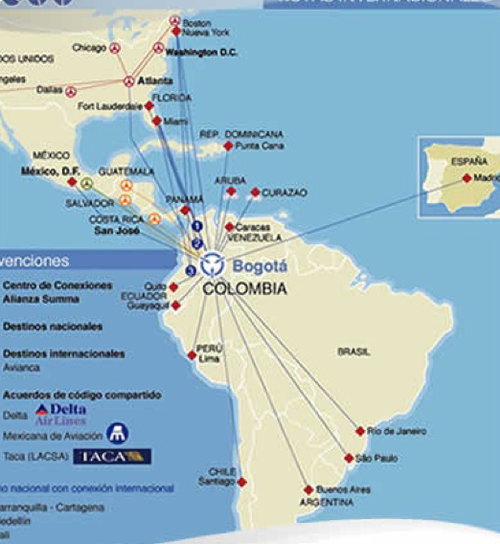 So it appears that what will exist is more an association than a powerhouse carrier. This is not, of course, unique in today’s industry and can still be a powerful force. The Lufthansa group is a prime example of this kind of combined brand strength being utilized. And in Latin America, the group concept has been validated by both the existing TACA and LAN.

But this is a version of that model which has a lot of potential upside. Aside from the multiple operators represented by TACA, Avianca controls Brazil’s Ocean Air as well as having dominant shares of two Ecuadorian airlines and a rumored expansion in Paraguay.

Clearly, there are numerous opportunities for synergy and feed that could create a group with regional dominance. On the other hand, the specific operations encompass markets of disparate degrees of development and potential. One size may not fit all and the possible entry of a low cost competitor is strong. Internationally, they come late to a party with lots of attendees already at the table.

Competition for LAN and COPA

A quick look at the networks of LAN and COPA reveals the numerous opportunities for a good competitive fight. 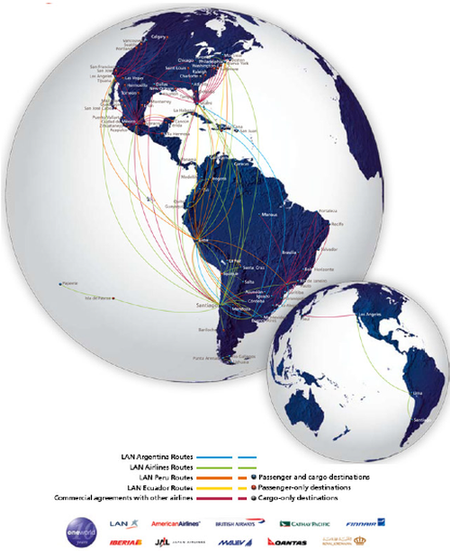 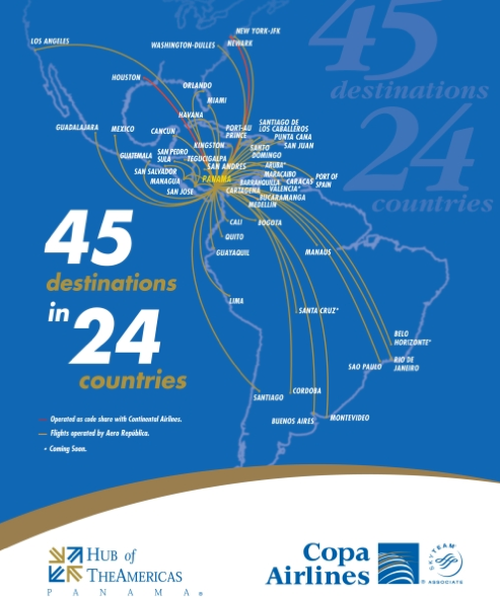 As outlined in the Centre's previous examination of COPA, that carrier is already a substantial player in the Colombian market by means of its subsidiary Aero Republica. Furthermore, its close ties to Continental and pending entry into Star Alliance provide huge opportunities for cooperation and traffic feed.

LAN, which already has an extensive presence across the region and beyond, is especially evident in Lima with LANPeru. Chart 1 shows the competitive landscape at present; LAN also has a strong domestic network in Peru. It is also noteworthy that COPA operates four daily nonstops from Lima to Panama to feed its network.

An additional advantage for LAN is its oneworld membership that ties it to both the strongest North American player, American, and the culturally linked Iberia.

And again, as is the case with Avianca, this does not factor in the inherent advantages that accrue to the Brazilian airlines, which occupy the largest domestic market on the continent.

There is also the question of hub proximity in determining the plan’s viability. Chart 2 shows the distances between the four hub cities of the new group. For comparison, Chart 3 shows similar distances for the core members of the Lufthansa group.

It becomes immediately evident that if hub proximity were a fatal flaw, the Lufthansa group would be problematic. But there are some very significant differences in terms of the two.

First, the European cities are all major industrial and/or financial centers with residents amongst the wealthiest on earth. The same cannot be said with regards to the Latin hubs in either global stature or affluence.

Second, the European cities each host numerous and frequent longhaul flights, which offer different departure times and routings that actually enhance customer choice while keeping the cash in essentially the same till. For the Latin group, the longhaul connections are not only far fewer but also tend to be to the same cities. And the lack of global alliance partners makes the establishment of a broader codeshare network system far more complex.

Finally, the medium haul spokes that emanate from the European hubs tend to also be filled with prosperous consumers with a high propensity to travel. Even the current depressed travel market in Stuttgart surpasses that of Quito at the best of times.

There are a great many factors at play in this consolidation, not the least of which is the fact that the companies are privately held, making numbers hard to come by. But, as in all endeavors, there are some positives and negatives to be observed.

On the plus side:

On the minus side:

Latin America has a passion for the formation of trans-national airline groupings. So far, the greatest beneficiary of that approach appears to be LAN. However, LAN's position has been achieved in a period with marginal competition from the big player, Brazil. The moribund Varig had for years led to drastic underperformance - a shortcoming now being addressed by the resurgent o GOL, by TAM and a still-small but fast growing Azur, the David Neeleman-led LCC.As Brazilian carriers re-emerge as acolytes of the continent’s most dominant nation, there are few sure bets.

The new combination holds considerable promise, but it will have to work hard if it is to achieve the market strength it aspires to. Meanwhile, a TACA-Avianca team promises to lift the level of competition in markets where high fares have previously dampened travel demand.