Airports of Thailand (AoT), operator of the country’s major international airports, reported a 6.3% year-on-year reduction in passenger numbers in Jul-2009, but passenger numbers had already started falling in the same month last year (by 1.3%), meaning the decreases are now compounding.

On the surface, AoT’s premier airport, Bangkok Suvarnabhumi, appears to be holding up, with total volumes down just 1.4% last month, but the figure reflects the transfer of domestic volumes from Don Muaeng Airport. Domestic passenger numbers rose 51.5%, while international traffic at Suvarnabhumi was down 12.9% last month (following a 1% increase last July).

AoT’s combined cargo traffic entered negative territory in Aug-2008, and it looks likely that decreases could also start to compound when traffic figures for Aug-2009 are released. 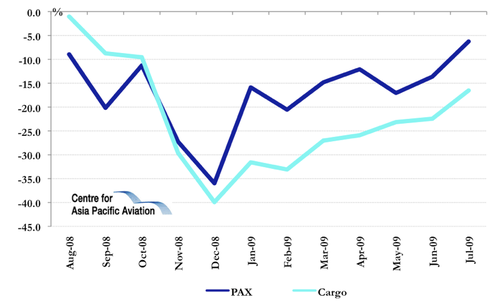 Overall domestic passenger volumes at AoT airports are back into positive territory, rising 5.9% in Aug-2009, erasing all of the previous year’s fall. But even bigger reductions were recorded in subsequent months last year, while could make for quite spectacular increases in coming months. The reality is, growth could be little changed from 2007 levels. 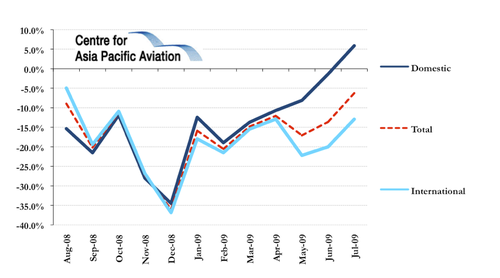 Traffic at the two Bangkok airports was down a combined 9%+ last month, whereas Phuket was down just 3.1%. Chiang Rai Airport has recovered last year’s fall, while Chiang Mai came close to doing likewise.

Outlook: Challenging times ahead for Bangkok

V Australia’s announcement to launch direct services to Phuket from Melbourne and Brisbane later this year could reflect a growing trend of airlines (and passengers) wishing to avoid the Bangkok hub. Thai Airways’ financial troubles, relative to its Asia Pacific and Middle East peers are also expected to weaken the Bangkok hub’s outlook.