The gain coincided with statements by New Zealand Prime Minister, John Key, that travel restrictions between Australia and New Zealand could be relaxed by Christmas, with services operating effectively as domestic operations. Mr Key and his Australian counterpart, Kevin Rudd, will meet this week to discuss plans to create a single economic market for air travel between the countries. According to Mr Key, who also holds the tourism portfolio, “when you see the package you'll see that we've significantly streamlined and made things more efficient and there'll be gains - it'll be a more domestic-like experience."

Thai Airways, meanwhile, fell 3.2% yesterday, following Friday’s 1.3% gain. The carrier stated it expects to report a net profit of USD176-206 million in 2009, due to a stronger expected 2H2009 after a net profit of USD73 million in 1H2009. The carrier expects demand to start improving from this month, with signs of a beginning to the economic recovery and a stabilisation of the domestic political situation expected to result in an operating profit in 3Q2009. Load factors are also showing signs of improvement, with Aug-2009 load factor to date at approximately 77%, compared to 71% in Jul-2009 and 65.1% in Jun-2009.

The benchmark Shanghai Composite Index, meanwhile, plunged 5.8% yesterday, the largest reduction since 18-Nov-09, extending its decline from this year’s peak on 04-Aug-09 to 17%. Hainan Airlines experienced the largest share price reduction among the major Asia Pacific Airlines yesterday, slumping 8.9%, with China Southern, Shanghai Airlines and China Eastern all lower (-5.8%, 3.5% and -0.4%). 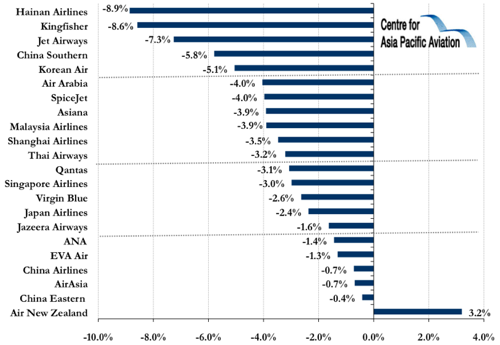