The AMEX Airline Index (+1.4%) has risen for its tenth straight day, despite an increase in oil prices (+2.2%), to USD72.51. Stocks were assisted by a rise in the wider market, with the Dow (+1.1%) rising on the back of the Federal Reserve’s announcement that industrial activity rose 0.8% in Aug-2009, which was better than previously forecast.

Delta Air Lines (+3.3%) rose after announcing late in the day that it plans to launch a private offering of USD500 million in secured senior notes due in 2014. The carrier stated it would use the capital gained from the offering, in addition to initial borrowings from new senior secured credit facilities, to repay its Northwest borrowings. Any remaining funding will be used for “general corporate purposes”.

The planned offering will allow Delta to better handle its USD904 million debt it will acquire once it receives a single operating certificate to allow it to fully integrate Northwest Airlines' operations into its own. The carrier expects to receive the certificate by the end of 2009.

However, United’s unit operating costs are also expected to reduce by 19.7% to 19.9% over the period. Non-fuel expenses are meanwhile expected to be flat to -0.5%.

The carrier also expects to raise approximately USD300 million during the quarter, and is looking into other cash raising options for 4Q2009. United forecasts it would end the quarter with approximately USD2.6 billion in unrestricted cash. According to JP Morgan, the expected cash level appears to be adequate and it is likely United will be able to refinance soon.

Meanwhile, FedEx (-1.7%) slipped despite a forecast by Marketwatch that the freight carrier will post 1Q2009 earnings of USD0.58 per share. 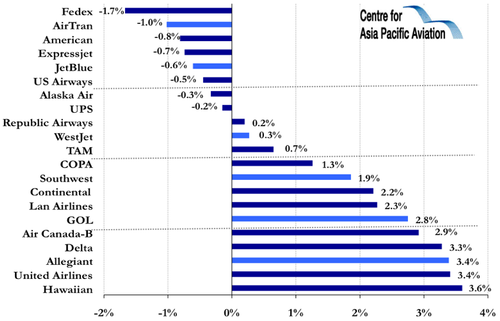