Shares in Turkish airport operator, TAV Airports, surged yesterday as Turkish Airlines announced an order for five B777-300ERs, bucking the global trend for capacity reductions. The Star Alliance member’s passenger numbers soared 15.8% in 2008 and rose a further 8.4% in the first three months of 2009 to 4.9 million. Cargo volume rose 6.4% in the first quarter.

Turkish Airlines, which currently operates a fleet of 65 Boeing aircraft, including B737NGs and leased B777-300ERs from India’s Jet Airways, is continuing to expand its network. This week it announced plans to extend Istanbul-Singapore service to Jakarta later this year and it recently launched scheduled services from Istanbul to Ufa (Russia) and Bingazi (Libya), taking its network to 115 destinations. The airline also boosted frequency to Amman (Jordan) from 11 to 14 per week recently.

Elsewhere, Ferrovial’s shares eased 2.1% as BAA revealed a widening in net losses in the three months ended 31-Mar-09 to GBP316.2 million, compared to a GBP55.6 million loss in the previous corresponding period, due mainly to losses on derivatives. Adjusted EBITDA increased by a healthy 27.9% to GBP185.8 million, despite passenger numbers at its three London airports falling by 10%, or nearly 3 million, to 24.8 million.

BAA's chief executive, Colin Matthews, stated, “although overall traffic trends weakened due to the economic downturn, Heathrow continues to demonstrate resilience, benefiting from its position as a major global hub airport for long-haul services. The rest of the year will be difficult and will present more challenges, but our focus remains on raising service standards and maximising efficiency." 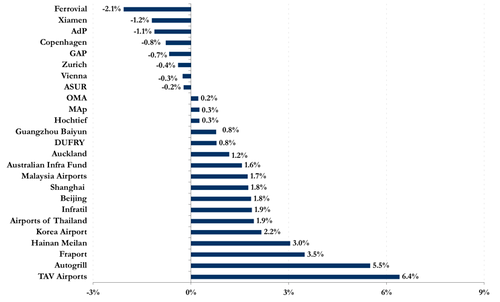