TAM to sell frequent flyer unit in IPO, Delta and US Air surge

American Airlines (+3.6%) CEO, Gerard Arpey, met with Japan's Minister of Land, Infrastructure, Transport and Tourism yesterday to reinforce the airline's commitment to Japan Airlines. Mr Arpey stated American/oneworld/TPG may sweeten its proposed capital investment in JAL, stating, “conceivably there could be a bigger investment made by the...group, depending on the circumstances that have to be worked out with the government and with JAL”.

Separately, Delta Air Lines CEO, Richard Anderson, indicated that it has a financial advantage in investing in JAL, with cash in hand of approximately USD5.3 billion at the end of 2009. Delta earlier offered JAL a USD1.02 billion financial package with SkyTeam alliance members, including a USD500 million investment. 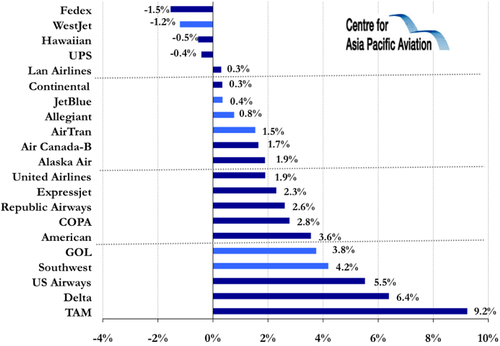