In Latin American markets, Brazil’s Bovespa (-0.9%) declined on worldwide concern over Europe’s debt issues. The expiry of a number of options on some blue-chip stocks also sent the market lower. Chile’s IPSA (+0.3%) gained slightly, tracking the rebounding US market late in trading.

TAM (-5.1%) shares slumped after the carrier reported the day before a net loss of USD32.3 million for the three months ended 31-Mar-2010, compared with a net profit of USD14.3 million in the previous corresponding period. The decline came as operating revenue slipped 0.5% year-on-year, to USD1,446 million. Total operating costs rose 0.9% to USD1,393 million.

For FY2010, TAM expects to increase capacity (ASKs) by 12% year-on-year, led by a 14% increase in domestic capacity. International capacity is to be increased by 8%. The carrier expects this increase to result in a load factor of 69% for the year, with 66% for domestic and 75% for international.

During trading, the carrier also stated it is planning to launch Rio de Janeiro-London service in Aug/Sep-2010, with A340 equipment. The carrier stated it is still in talks for slots at London Heathrow Airport. British Airways is the only other carrier operating on the route at present.

GOL down with Bovespa

Elsewhere, Copa Holdings was flat. Copa Airlines announced during trading that it took delivery of two new B737-800 aircraft as part of its ongoing fleet and network expansion programme. With these two deliveries, Copa has now received five of the eight aircraft scheduled for delivery in 2010. 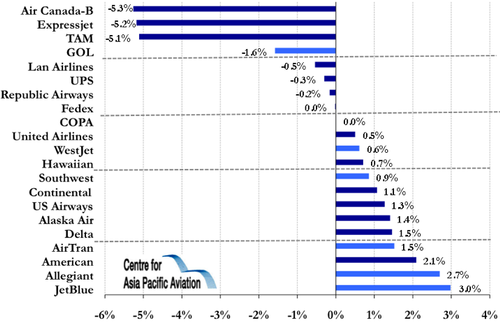