TAM (+0.6%) announced it has purchased competitor, Pantanal, for USD7.3 million, to further expand its regional network and increase its number of slots at Sao Paulo Congonhas Airport, the city’s domestic airport. Rival GOL (-0.2%) currently holds the largest number of slots at the airport.

TAM CEO, Libano Barroso, stated the purchase of the smaller carrier would fit into its plans to develop a new business line to operate a carrier with aircraft configured with less than 100 seats. The aircraft would operate to 100 small and medium-sized destinations in Brazil.

However, the deal will also mean TAM will take on approximately USD70 million in Pantanal’s debt. The acquisition is yet to be approved by Brazil’s civil aviation authority and antitrust authorities.

US Transportation Secretary, Ray LaHood, announced a new regulation prohibiting US carriers operating domestic services from permitting an aircraft to remain on the tarmac for more than three hours without deplaning passengers, with exceptions allowed only for safety or security reasons, or if air traffic control advises the pilot in command that returning to the terminal would disrupt airport operations. US carriers operating international flights departing from or arriving in the US must meanwhile specify, in advance, their own time limits for deplaning passengers, with the same exceptions applicable.

Carriers are also required to provide adequate food and potable drinking water for passengers within two hours of the aircraft being delayed on the tarmac and to maintain operable lavatories and, if necessary, provide medical attention.

This rule was adopted in response to a series of incidents in which passengers were stranded on the ground aboard aircraft for lengthy periods and also in response to the high incidence of flight delays and other consumer problems. In one of the most recent tarmac delay incidents, the Department fined Continental Airlines, ExpressJet Airlines and Mesaba Airlines a total of USD175,000 for their roles in a nearly six-hour ground delay at Rochester, Minnesota.

Continental Airlines (+2.4%) made the largest gain of the day, while United Airlines (+0.9%) was also up yesterday on news the carrier plans to file for antitrust immunity on the Pacific with ANA in the US this week. Continental also recently launched a codeshare agreement with Lufthansa.

Hawaiian Airlines (+1.8%) was also up on news it has reached a tentative agreement with its pilots union, after three years of negotiations. 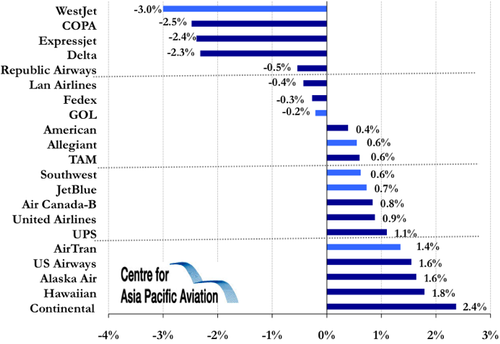