North and South American carriers made gains on Tuesday (19-Jan-2010), pushed higher with the wider market.

The Dow ended trading up 1.1%, boosted by health care sector stocks, following news Republican Scott Brown may win Massachusetts’ US Senate seat, which would result in an elimination of the Democrat’s majority in the Senate and allow an overhaul of the country’s health-care coverage laws. News of a sharp increase in foreign demand for long term US financial assets in Nov-2009 also boosted shares.

As a result, the AMEX Airline Index gained 1.6%. Oil prices also gained, rising 0.7%. Investors are considering the implications of the Japan Airlines bankruptcy on the oil market, as the carrier made use of oil derivatives to hedge fuel costs. The bankruptcy may force investment banks to unwind these hedges.

TAM (+4.5%) witnessed the biggest gain on Tuesday, following news its Multiplus SA frequent flyer programme reportedly plans to raise approximately USD721.2 million in an IPO. The programme plans to sell 39.3 million shares with the option for an additional 13.8 shares to be sold. The majority of funds raised from the offering will be used to purchase TAM fares to provide as awards to clients.

AMR, parent of American Airlines (-0.1%), is expected to post a larger loss in 4Q2009 than it did in 4Q2008 following a fall in traffic during the quarter. According to a survey by Reuters, analysts expect the carrier to report a loss of USD1.20 per share, or approximately USD400 million.

Analysts are also keeping an eye on American to see whether it can salvage its alliance with Japan Airlines, which looks likely to accept Delta Air Lines (+2.3%) offer and move across to the SkyTeam alliance. See related report: JAL bankruptcy a tsunami whose waves circle the world; maybe deadly for oneworld

Continental Airlines (-0.5%) is also expected to post a 4Q2009 loss, with analysts surveyed by Reuters estimating a loss of USD0.08 per share.

Continental stated the day prior it expects to report USD77 million in special charges and a non-cash income tax benefit for the three months ended 31-Dec-2009. The carrier is scheduled to release its full 4Q2009 results on 27-Jan-2010.

Republic Airways meanwhile continued its downward trend, and is currently below its 50-day moving average of USD7.36 and 200 day average of USD7.22, according to SmarTrend. 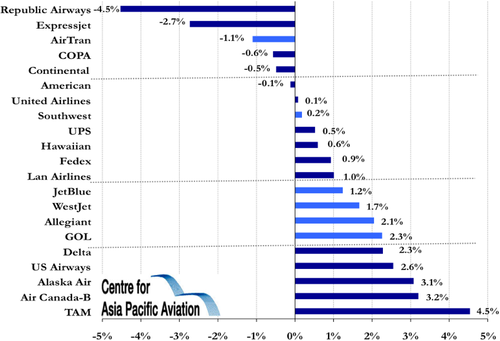