In Latin America, Brazil’s Bovespa (+1.1%) gained, tracking US stocks and global commodities higher. Stocks were also up on improved economic data for the country, which reported a 9.0% year-on-year expansion in GDP for 1Q2010.  Chile’s IPSA (+0.3%) moved slightly higher, with the retail sector rising on better than expected growth data for the country and inflation data released the day prior, which suggested strong consumer demand.

Tam Linhas Aereas (+1.2%) CEO, Libano Miranda Barroso, stated during trading that the carrier expects a "better" second quarter result compared with 2009 levels, due to a recovery in demand in Jun-2010. The carrier is expecting traffic growth of 18% in 2010, with an equivalent rate in 2Q2010, as demand receives a boost from the FIFA World Cup. International capacity (ASKs) is expected to increase 10%, exceeded by a 14% increase in capacity (ASKs), as the carrier launches two new routes to Europe in Aug-2010.

Domestic passenger traffic in Chile, Argentina, Peru and Ecuador rose 15.2%, as capacity increased 10.1%. As a consequence, the domestic load factor for the month increased 3.3 ppts, to 75.3%.

Also for May-2010, cargo traffic increased 39.3%. This increase was mainly due to the recovery in imports to Latin America driven by Brazil and the increase in operations to Europe with the B777-200 freighter fleet. In-line with higher demand, capacity grew 30.6%. As a result, the cargo load factor rose 4.4 ppts, to 70.4%. 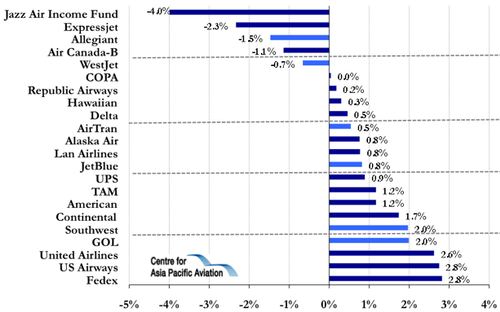