TAM and American lead carriers on the rise; Copa slips on fall in load factor

The majority of North and South American stocks ended trading up on Tuesday (08-Sep-09), as markets generally performed solidly and following Airbus’ forecast passenger traffic would improve in 2010 and 2011. The AMEX Airline Index (+0.9%) consequently rose, while the Dow (+0.6%) also gained. The rise in stocks came despite an increase in oil prices (+4.6%), to USD71.10.

LAN (+0.3%) reported shortly before the end of trading passenger a 4.4% rise in traffic, as capacity rose 7.4%. As a result, the Company's load factor decreased 2.2 points to 76.5%. International passenger traffic accounted for approximately 70% of total passenger traffic. LAN also stated during the day that it believes the worst of the global financial downturn’s effects on the carrier has passed, but it could still suffer from an increase in fuel prices or spread of the swine flu outbreak to the Northern hemisphere.

Hawaiian (+0.9%) was also up, following a US Bureau of Transportation Statistics (BTS) showing Hawaiian Airlines had the best on-time performance of all US carriers in Jul-2009, with 93.6% of Hawaiian’s services arriving and departing on time during the month. Hawaiian was followed by Alaska Airlines (+0.9%), with 87.2% 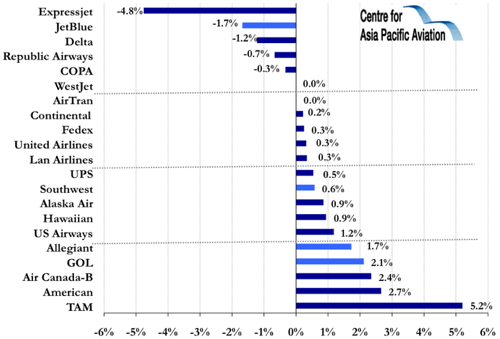