Somon Air, which launched services in 2008, now accounts for a leading 28% share of international capacity to and from Tajikistan. Unlike many other carriers in the region, Somon Air operates a modern fleet that consists entirely of western aircraft. It is now planning to distinguish itself further by pursuing IOSA certification. There are currently no IOSA-certified carriers in Tajikistan.

2013 will see the airport continue improvements to its facility and airfield including the construction of a new passenger terminal. French company Vinci is constructing the terminal which is planned to be 11,000 square metres and be able to handle over 5,000 passengers per hour. The new terminal is expected to open in Nov-2014.

While government-owned Tajik Air is the country’s flag carrier, Somon Air is now the country’s largest airline, also based at Dushanbe International Airport. Somon Air started in 2008 with a single Boeing 737-800. It has since steadily grown and now operates a fleet of six 737s.

* indicates a foreign carrier
Source: CAPA – Centre for Aviation & Innovata
Note: This data does not include Asia Airways or Samar Air.

New start-up Asian Express Airline is expected to commence operations in 2013. The start-up recently took delivery of its first ex-Vietnam Airlines A320 aircraft in Nov-2012. The airline already has two BAe Avro RJ100s and one RJ85 aircraft, and plans to add more A320s and RJ100s.

Asian Express was originally planning to launch operations in 2007. It has since been acquired by new investors who had planned to have the airline operational in summer 2012. In Feb-2012 Asian Express announced plans initially to operate domestically in Tajikistan before launching services to destinations in bordering countries.  In the medium-term the airline plans to operate to Iran, the Middle East, Pakistan, Russia and Turkey.

The air transportation market in Tajikistan is mainly international, with limited domestic services from Dushanbe to Khudzhand, Khorog, Kulyab and Gorno-Badakhshan. There are no low-cost carriers currently serving the market.

Russia accounts for most international capacity in Tajikistan

The Middle East, Central Asia, North East Asia, South Asia and Western Europe account for the remaining 16% of capacity.  Services to other Central Asian countries are particularly limited. There are currently only about 2,700 weekly seats between Tajikistan and its immediate neighbours. Somon Air only has 700 weekly seats within the region while Tajik Air only has 600 weekly seats, according to Innovata data. Almaty is the biggest Central Asian destination from Tajikistan but the Almaty-Dushanbe route is only served with eight weekly flights – four from Kazakhstani flag carrier Air Astana and two each from Somon Air and Tajik Air.

Russia is the country’s major market with seven out of 10 of the country’s largest routes (based on seats per week) being to Russian destinations and 10 Russian carriers operating to Tajikistan. There are currently about 44,000 weekly seats between Tajikistan and Russia.

Russia is also Tajik Air’s main market, accounting for over 80% of its international capacity. Tajik Air currently has almost 8,000 weekly seats to seven Russian destinations. Tajik Air and Somon Air compete in four of these markets.

According to the CIA World Factbook, up to one million Tajik citizens work in Russia due to low employment opportunities in Tajikistan. Tajikistan’s population was estimated to be 5.05 million in Jul-2012 with a GDP per capita in 2011 of USD2,100. This is much lower than other Central Asian nations such as Kazakhstan (USD13,000) and Turkmenistan (USD7,800). 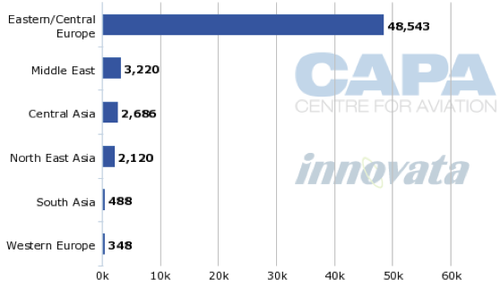 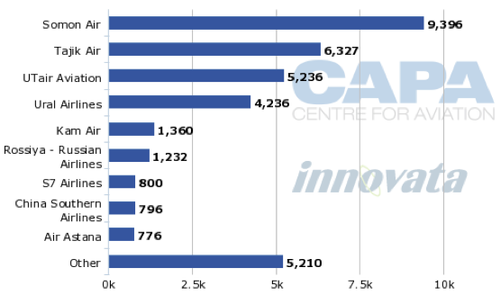 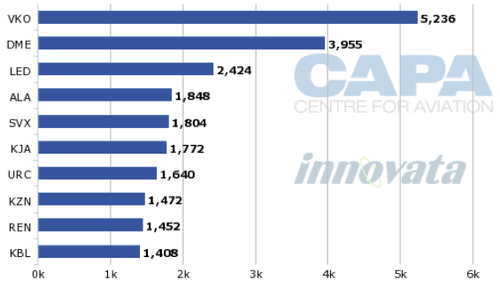 Seven of the above 10 routes are to Russian destinations while the remaining three are to Almaty (Kazakhstan), Urumqi (China) and Kabul (Afghanistan).

Tajik Air and Somon Air are the main competitors on services from Tajikistan however they compete directly on less than half of their route networks. Out of Somon Air’s 15 routes and Tajik Air’s 17 routes from Dushanbe, they currently compete on seven routes.

In addition to the four Russian markets of Moscow, Saint Petersburg, Novosibirsk and Yekaterinburg, Somon Air and Tajik Air both serve Almaty, Istanbul and Urumqi. Tajik Air is the only Tajikistani carrier now serving Iran, India, Pakistan and Afghanistan. Somon Air has nine unique destinations in Russia – mainly secondary cities that are not frequently served – and is the only Tajikistani carrier serving Dubai, the Ukraine and Western Europe. Frankfurt is the only destination in Western Europe and is only served with one weekly flight.

The airlines don’t appear to cooperate on any services however.  Somon Air is more focused on the higher end market, offering a modern product with western aircraft. It has tried to take a similar approach to that of Air Astana, which launched services in 2002 and is one of only a few airlines from the region operating to western standards. In 2006 Air Astana was offered a start-up role in Somon Air but declined. Somon Air, however, was able in Oct-2012 to hire Air Astana’s founding CEO, Lloyd Paxton.

Tajikistan has a weaker economy than most of its larger neighbours and Somon Air’s main international market, Russia, consists mainly of migrant worker traffic. This could make it challenging to attract the premium traffic and yields needed to support the carrier’s relatively upmarket position.

Somon Air will also need to balance out its network if it is to become a leading carrier in the region. It currently does not serve any destinations in East Asia except Urumqi, which is in the far western corner of China. And it only has one weekly flight to one destination in Western Europe.

Unlike Air Astana, Somon Air is free to expand its European operation as Tajikistan is currently not on the EU blacklist. But there is limited outbound demand in Tajikistan for services to most markets other than Russia and the inbound demand has not reached a point where most medium or long-haul routes can be sustained.

While Somon Air could face challenges in expanding under a premium-focused strategy, its outlook is brighter than Tajik Air, which also appointed a new CEO in Nov-2012 with Firuz Khamroyev replacing Isakov Muzaffar Safarovich. Tajik Air is reportedly facing difficult times with services to Baku, Islamabad and Delhi to be suspended due to the airline’s financial difficulties. Mr Khamroyev reportedly said to Asia-Plus that the airline’s financial situation is not stable.

According to its website, Tajik Air has a fleet of 36 aircraft, only 15 of which are currently operated. The operational aircraft include only three western aircraft – one 737-300, two 737-500s and one 757-200. The rest of the operational fleet includes one Antonov An-24, one An-26, two An-28, one Yakovlev Yak-40, one Xian MA-60 and three MI-8MTV helicopters. The remaining 21 aircraft are in long-term storage.

2013 will be a testing year for Tajik Air while it continues to face increasing pressure from not only Somon Air and foreign carriers, but potentially from start-up Asian Express Airline. This new start-up's plans to enter the domestic market and later into regional international services will further aggravate Tajik Air’s current financial difficulties.

Tajik Air’s future will depend on whether it can trim its fleet and focus on its most profitable services in order to effectively compete against growing competition in the market. It may also depend on whether it will continue to receive financial support from its main shareholder, the Tajikistani Government. Meanwhile Somon Air expects to continue to expand and take advantage of the growing air transportation market in Central Asia. The next few years could see the airline grow to become a significant player in the region.