Taiwanese share prices closed up 1.06% yesterday, ending above the key 8,000 point level for the first time since mid-Jun-2008 amid optimism for global economic recovery.

China Eastern Airlines’ shares soared 5.3% yesterday, as the carrier entered an agreement with Airbus regarding the purchase of 16 A330 series aircraft (with engines), for delivery in stages between 2011 and 2014.

The airline stated it received “material price concessions” with regards to the aircraft, adding that the extent of the price concession grated was “more favourable” than those received in its Oct-2004 A330 order. The aircraft will primarily be used to satisfy increased long and medium haul route demand and will increase ATKs of the airline by 19.5% (without considering fleet retirements). The aircraft will be funded through bank loans from commercial banks.

Also in North Asia, Japan Airlines’ shares fell 1.0% yesterday (compared to a 1.3% gain in the benchmark Nikkei average), to close at JPY96 on the Tokyo Stock Exchange, with investors appearing relatively unfazed by news of a possible court-led restructuring of the carrier. However, the news could impact American Airlines’ and Delta Air Lines’ plans to become a strategic overseas partner to JAL.

The carrier’s share price has declined 55% in 2009, the largest declining stock in the Nikkei 225 Stock Average. 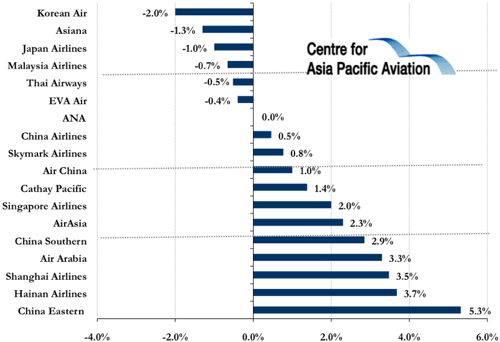