Shares in the newly branded MAp rose 1.4% in trading on Friday (23-Oct-2009), as the investment fund released the 3Q2009 results for its largest airport, Sydney Airport.

Sydney Airport’s results three months ended 30-Sep-2009 showed a general recovery, reporting a 6.3% year-on-year increase in EBITDA, its first quarter of growth since 3Q2008, on the back of a 0.9% growth in traffic. The airport reported strong revenue growth of 4.6%, led by a 8.1% increase in aeronautical revenue and increases in retail and commercial revenue of 1.9% and 3.6%, respectively.

The airport also reported a 27.9% decline in capital expenditure during the period, due to the continued restricted availability of capital.

Mexican airports’ results reflect a tough 3Q2009, as traffic continues to suffer from the lingering impact of Swine fly.

Mexico’s airport operators, OMA and ASUR ended the week on a low, falling 2.8%, 1.9% and 0.1%, respectively, after reporting falling revenue and profit last week.

ASUR reported a slight decrease in EBITDA on the back of a 2.7% reduction in revenue while OMA saw a 1.6% decline in revenue. OMA reported a 2.6% increase in 3Q2009 EBITDA, but a 17.1% fall in net profits for the period. 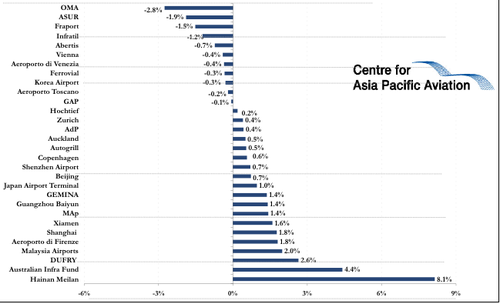