“Sustainable turnaround may be in the works”, as traffic contractions soften in Aug-2009: ACI

Global airport passenger traffic showed some positive signs of improvement in Aug-2009, with the steep traffic contractions experienced in the past 12 months appearing to have “turned the corner, softening in August”, according to Airports Council International (ACI).

According to ACI World Director General, Angela Gittens, “flat is beautiful after a year of negative results…. This is good news and the trend charts indicate that a sustainable turnaround may be in the works”.

Ms Gittens added that “even taking into consideration that the comparison to results in August of last year, when global traffic slowed due to the economic situation and travel restrictions in China related to security measures for the Olympic Games, the improving trend is visible”. 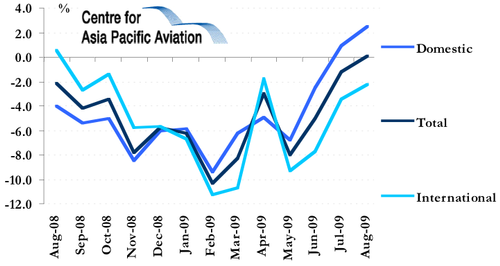 During Aug-2009, the Middle East was again the standout performer, even growing off a strong base in Aug-2008. Middle East total passenger numbers grew 7.7%, with growth of 8.1% internationally. 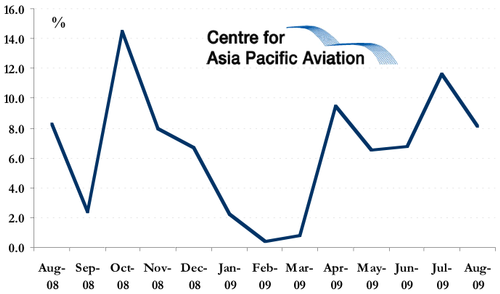 Among the other growth regions, the Asia Pacific and Latin America experienced year-on-year total passenger growth, up 11.2% and 3.0%, respectively. Asia Pacific growth in the month was a notable turnaround from a year-to-date contraction of 0.6%, as airlines discount heavily to top up load factors. 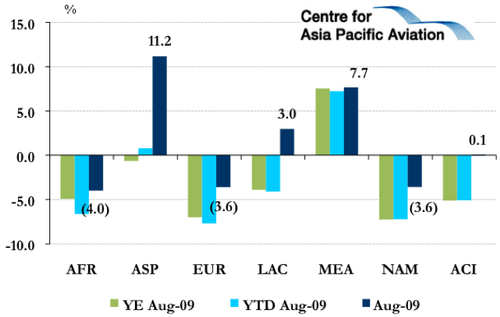 Emerging markets “pulling ahead”; Europe and North America “lagging behind

ACI added that the emerging markets of China, India, and Brazil are “clearly pulling ahead”, but mainly in domestic traffic, which still outperforms international demand.

Europe and North America continues to lag, as expected, with overall passenger contractions of 3.6% in both markets, as they also suffered the largest slump in the first eight months of 2009 (of 7.0% and 7.3%, respectively).

This was driven by strong results in the Asia Pacific region (+17.1%, thanks to China's weak base last year) and Latin America & Caribbean (+10.6%).

Although total international traffic remained depressed , down 2.2% year-on-year, this reduction is an improvement over the 3.4% decline reported in Jul-2009 and Jun-2009’s 7% decline. The Middle East and Asia Pacific regions both reported positive international growth (of 8.1% and 3.7%, respectively).

“No turnaround yet” for international freight demand

According to ACI, “no turnaround has been seen as yet in international freight”. Worse still, ACI added that, on a month-on-month comparison, “we are now comparing declines with declines”.

For both total and international freight, the Middle East region was the only region seeing positive growth in the month (+7.2% year-on-year), while domestically, only the Asia Pacific region reported positive results (+12.4%), due in large part due to increased activity at Chinese airports.

Africa, Latin America & Caribbean and North America regions all experienced double-digit freight contractions in the month (-14.7%, -12.3% and -11.2%), while Asia Pacific results were down by 3.7% (in the region, Singapore and Tokyo Narita levels were down 14% and 10%, respectively), although this represented a rising traffic trend. 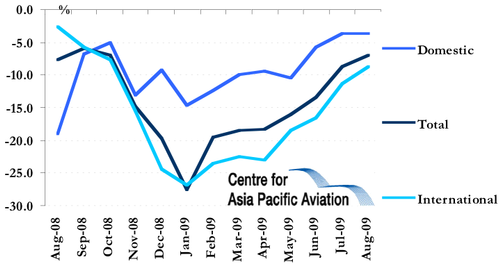 Looking forward, ACI stated that if the positive year-to-date trend continues, global annual declines in 2009 would be much more moderate than expected, likely between -3% to -4%.

ACI added that the IMF half-yearly World Economic Outlook predicts a better than anticipated, yet sluggish, recovery throughout 2009 and 2010, due to positive signs of improvement in the West and Developing countries.

Although growth is expected to be modest in Western Europe, North America and Japan, the IMF indicates that emerging and developing economies are “further ahead on the road to recovery”, led by a resurgence in Asia, particularly with anticipated strong growth in China and India.