Surprising passenger growth in Sep-2011 but weakness expected in the months ahead: IATA

Passenger traffic rose 5.6% year-on-year in Sep-2011, according to IATA, which described the result as a "pleasant surprise". However, despite the better-than-expected figures in the month, IATA stated it was preparing itself for weakness in the months ahead amid deteriorating business and consumer confidence and collapsing freight demand, the precursors for a slowdown in passenger growth: “We are still expecting a general weakening in passenger traffic as we head toward the year-end”. Meanwhile, there was a further deterioration of cargo volumes in Sep-2011, with a 2.7% contraction in the month, for the fifth consecutive month of declines, in line with falling business and consumer confidence.

Despite stronger than expected growth in passenger markets during Sep-2011, the industry is expecting “more difficult times ahead” according to IATA.

IATA’s recent Airline Business Confidence survey, released on 19-Oct-2011, reported a significant decline in profitability expectations over the next 12 months, following a sharp deterioration in operating conditions in the third quarter, a major deterioration in cargo markets and the deteriorating economic outlook. Concerns also centre around expectations of increased unit costs and yield pressure, not only in the cargo markets but in the passenger segment, where confidence in yields over the next 12 months is at its lowest levels since early 2009. The majority of respondents expected no change in passenger yields while 90% of respondents were split equally among those expecting cargo yields to remain the same or decline.

Recent and expected changes in yields

The surprise growth and rebound in international passenger traffic of 5.6%, which exceeding the 4.6% year-over-year increase in Aug-2011, typically a busier month for the industry, resulted in traffic levels returning to those reached in Jul-2011 following the dip in Aug-2011. 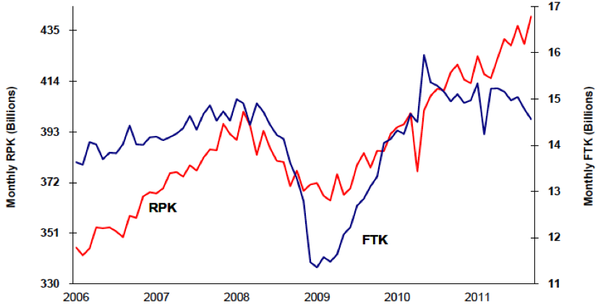 Capacity was also up on a month-on-month basis, but lower than the levels of traffic growth, resulting in a month-on-month load factor strengthening. However, the growth trend is slowing, with traffic trending upwards at an annualised rate of 4% between May-2011 and Sep-2011, compared with growth of twice this level in early 2011. 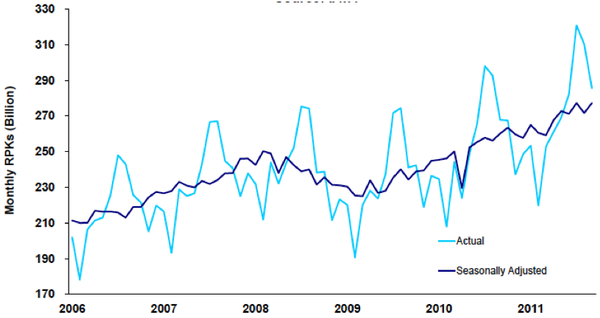 "Continuing strong air travel markets may reflect the robust conditions in emerging markets and travel booked earlier in the year when there was more economic optimism”, IATA said, while also warning that the sharp decline in business confidence in most economies, and the weakness in US and European consumer confidence, suggest “reluctance for both business and leisure travel”. 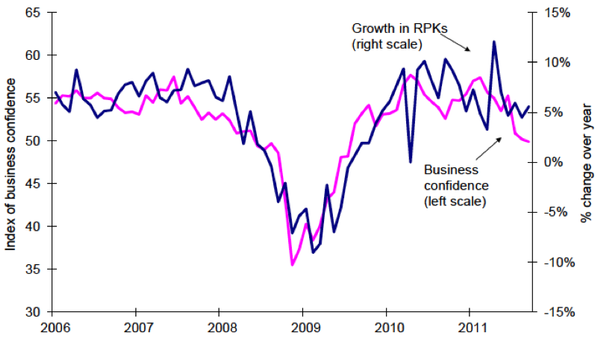 European carriers were among the top performers for the month, with a 9.2% increase in international traffic during the month, despite the continuing Eurozone economic conditions, with IATA noting that "the weak euro is enhancing Europe's attractiveness to tourists and creating export opportunities for business”. Demand was also strong for Latin American carriers, growing 10.6% year-on-year amid robust economic conditions, while Middle Eastern airlines reported traffic growth of 9.1% on a 8.5% capacity increase which, while robust, is “a step change from the 15% capacity increases seen in recent years”. 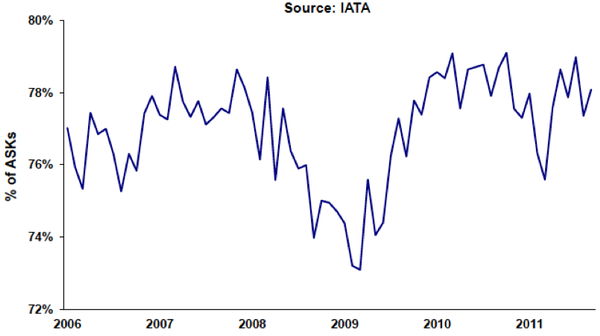 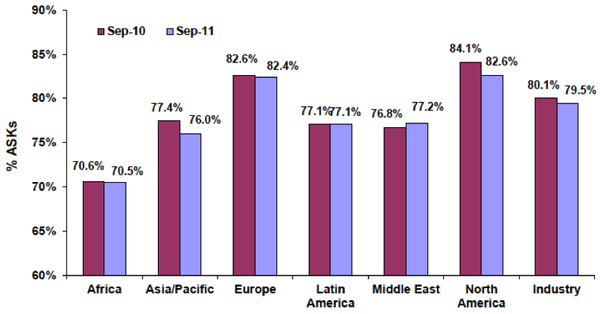 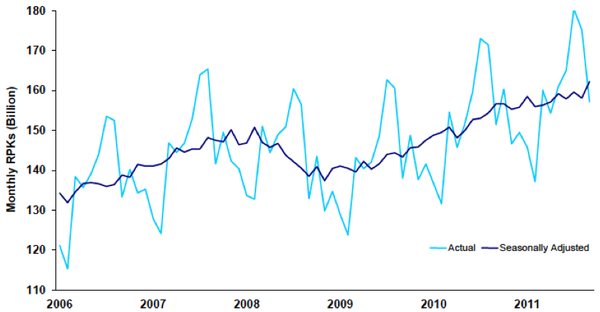 IATA noted that the recovery in Japan’s domestic market following the 11-Mar-2011 earthquake and tsunami stalled in Sep-2011 with traffic domestic traffic declines of 14.5% year-on-year, a worsening from the 12.3% decline witnessed in Aug-2011. 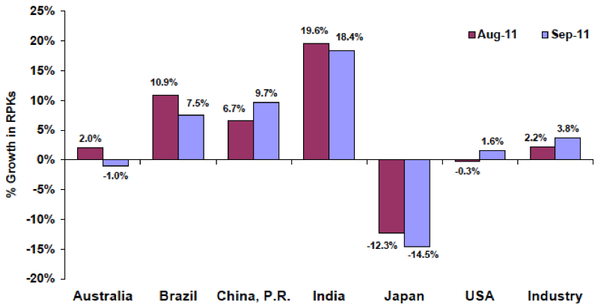 Carriers in the US domestic market, the world’s largest domestic market, reduced capacity by 0.7% in the month, but recorded a 1.6% increase in demand, with the carriers’ in the North American market continuing their strategy of cautious capacity growth. 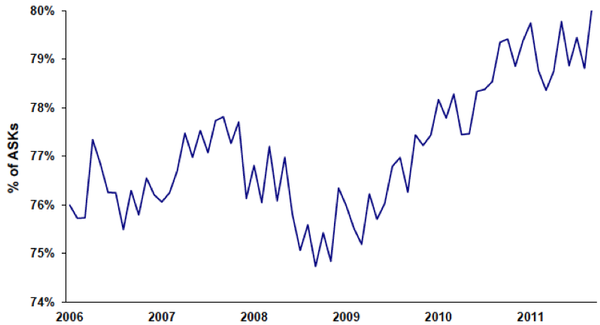 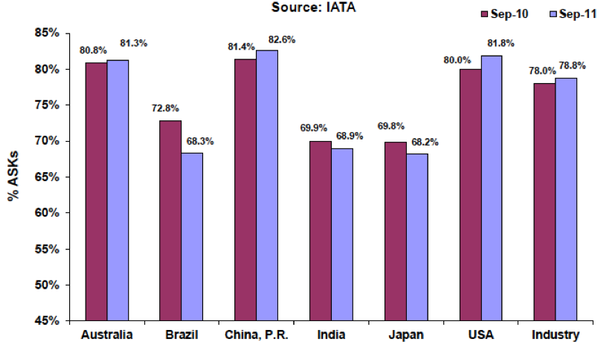 Sep-2011 was an even more challenging month for freight operators, with a 2.7% decline in freight traffic, marking the fifth consecutive month of declines. Overall, global cargo volumes are 5% lower than at the end of 1Q2011, due to the worsening trade and economic conditions worldwide, which has resulted in inventory to expected sales ratios rising and shipments by air being cut. 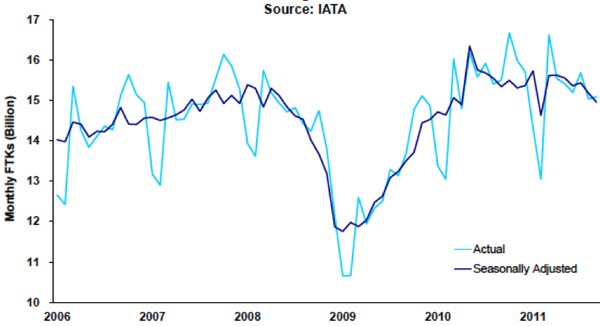 During Sep-2011, there was particular cargo weakness in the Asia Pacific, the home of the largest players in air cargo, where demand has been the hardest hit, with a 6.3% weakening in Sep-2011.  IATA attributed the weakness to the continued effects of Japan’s 11-Mar-2011 earthquake and tsunami on global supply chains and the knock-on effect of weakness in Western economies for manufacturers in Asia but noted that “robust economic growth” continues to characterise this region. Meanwhile, weak volumes out of North America and Europe have stalled demand for airfreight services. Unsurprisingly given current economic conditions, European carriers saw reduced cargo volumes in Sep-2011, with declines of 2.4% while cargo demand in North America remained flat.  Latin America and the Middle East are the only two regions whose airlines witnessed freight growth in the month.

IATA in its 3Q2011 cargo e-chartbook, released on 26-Oct-2011, noted that the past quarter has seen cargo markets “deteriorate significantly” with the weakest major trade lane being Within Far East, where volumes are down 10% year-on-year. 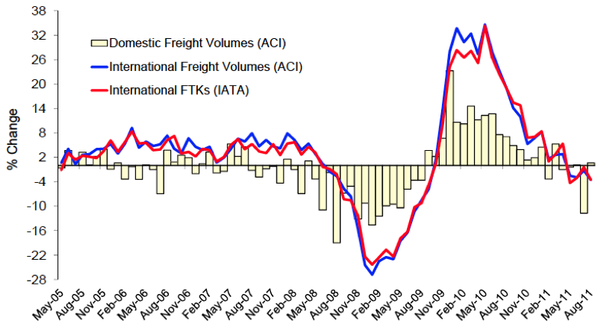 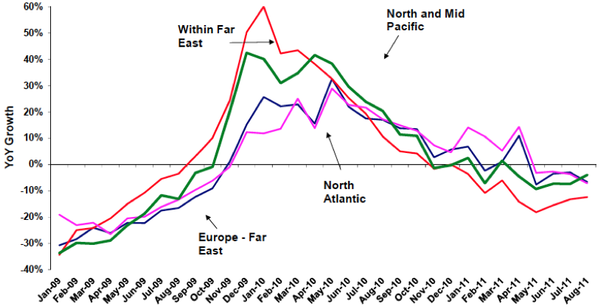 Freight load factors, meanwhile, are down 6 ppts from the early 2010 peak, as capacity continues to enter the market through widebody passenger aircraft capacity, while demand shrinks. This combination of weak demand and falling load factors will have an impact on profitability in the current quarter and year.

Cargo rates have come under downward pressure from weak demand and falling utilisation, IATA noted in the 3Q2011 cargo e-chartbook, adding that overall rates are 4% down and rates between Southeast Asia and Europe have slumped 19%. However, surcharges have been rising sharply over the past year, reflecting the 30-40% increase in jet fuel costs. Including these surcharges suggests that yields were still rising on average up to Jul-2011 although the situation subsequently deteriorated. Overall, cargo profitability, which began to fall in 2H2010, has declined further this year, and revenues are weak. 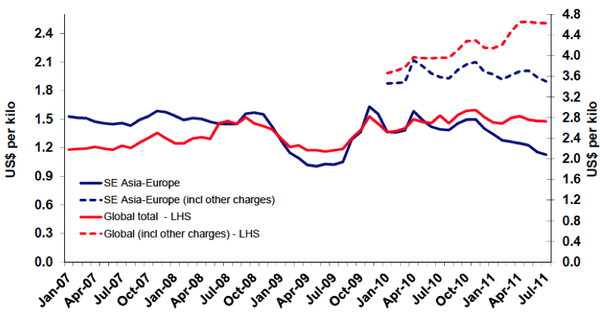 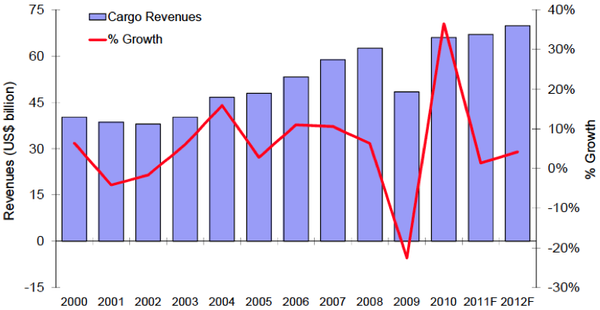 As a result in the stagnation of global air freight demand since the beginning of 2011, IATA has significantly reduced its full-year freight volume growth projection from 5.5% to 1.4%, as per its Sep-2011 financial forecast.

The Sep-2011 traffic results and the caution about the remainder of the year are in line with expectations for a decline in profitability in 2011 and heading into 2012. IATA is expecting profitability to decline from USD6.9 billion in 2011 to USD4.9 billion in 2012 for a margin of just 0.8%.

This decline in profitability reflects continued reductions in business and consumer confidence and current economic uncertainty and weak trade conditions, which are all likely to weaken air travel and air freight further, IATA has said.

According to The Conference Board, commenting on Sep-2011 economic data, “the further decline of the Euro Area Leading Economic Index, coupled with widespread weakness among its components has pushed the index into recessionary territory”. In the US market, The Conference Board separately noted economic indicators point to “soft economic conditions through the end of 2011”. It continued: “There is a risk that already low confidence – consumer, business and investor – could weaken further, putting downward pressure on demand and tipping the economy into recession. The probability of a downturn starting over the next few months remains at about 50 percent.” In China, The Conference Board noted that while continued economic expansion is expected, it will occur at a “slower rate in light of domestic monetary tightening and weakening global growth”. It continued: “Despite continued gains in the composite LEI this year, the main drivers of the upward trend, bank credit expansion and real estate investment, continue to slow compared to 2010. Meanwhile, the cooling of external demand from the United States, the Euro Area, and Japan may be adding to slower growth”.

Weak global economic indicators, impacting freight and increasingly passenger demand, combined with continued increases in aviation taxes and stubbornly high fuel prices, are all key concerns for the industry and barriers to profitability in an industry already pressured by weak margins. 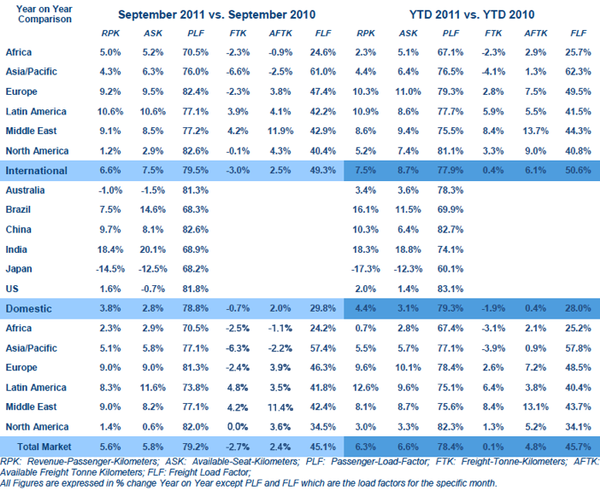 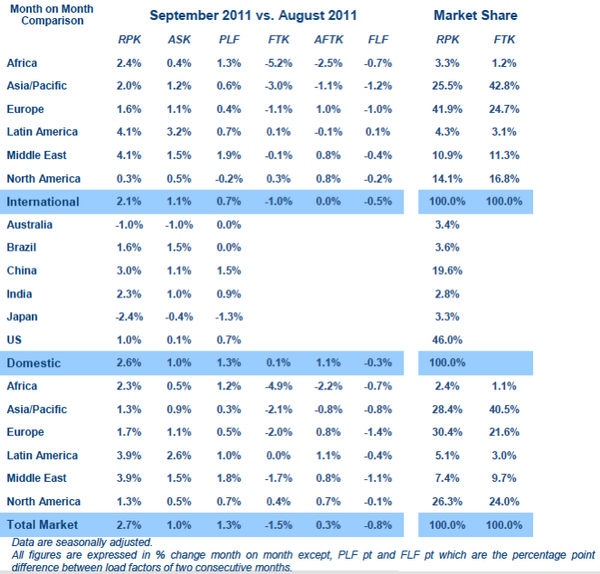