Worldwide airline capacity is growing solidly again this month, according to OAG. Global airline seat capacity and flight frequency will increase 6% and 5% year-on-year to 317.5 million and 2.6 million, respectively.

OAG stated the strengthening of the global economy is reflected in May-2010’s scheduling data. It added, “indications are that despite the astonishing volcanic ash disruptions to the air transportation system, this month’s scheduled seat capacity and frequency are normal and continue the growing trend the industry has been experiencing for the past nine months.”

Air traffic to and from all regions of the world show increases in May, with strong growth in seat capacity expected to/from Asia Pacific, with an increase of 9.3% to a total of 14.3 million seats; to/from the Middle East increasing by 11% to 11 million; and to/from Africa increasing 16% to 7.2 million seats.

Asia Pacific airline shares were mixed yesterday. Thai Airways surged 6.6% as Thai stocks leapt more than 4% after the government proposed early elections as part of a move to end the country’s political crisis. Tourism and hospitality shares led the rebound. 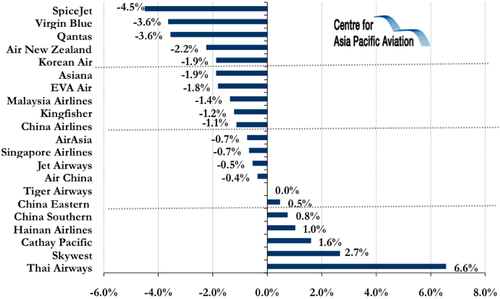