The decline follows the carrier reporting a 13% decline in net profit for the three months to 31-Dec-2010 last week. Revenue in the period rose 27%, while the airline also posted its highest-ever quarterly passenger load factor of 87.8%. Passenger traffic rose 33%. SpiceJet has announced plans to raise capacity by as much as 40% this year, thanks to funds brought in from investment by Indina billionaire Kalanithi Maran and KAL Airways, which increased their stock in the carrier to 39% in Nov-2010.

Shares in US LCC Allegiant Air dropped 7.9%, the largest single-day decline at the carrier for nine months. The carrier recently reported a USD20.9 million net profit for the three months ended 31-Dec-2010. However, announced plans to slow capacity growth further over 1H0211 and increase its fares to pass higher fuel costs onto passengers.

WestJet renewed its multi-year strategic distribution agreement with Expedia. Under the renewed agreement, WestJet's full schedule of fares and inventory will continue to be made available to consumers who book their travel each month on Expedia, Egencia and Hotwire sites in the United States and Canada. Shares in WestJet were down 1.5%. 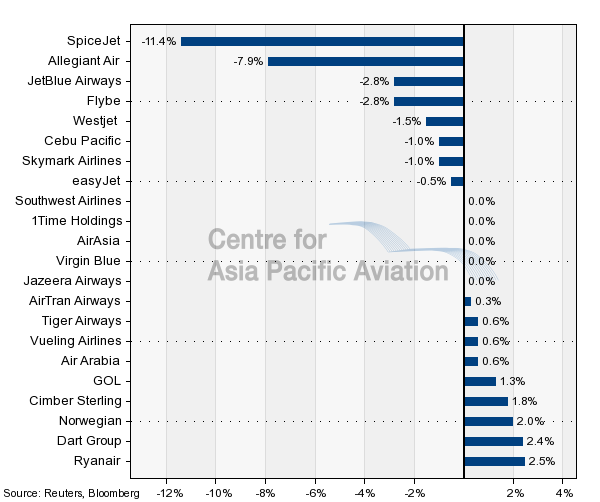