SpiceJet reported a decline in 3QFY2010 profitability due to higher fuel costs and taxes, with net profit declining 13.3% year-on-year to USD20.7 million. Operating profit, however, increased 10% to USD24.5 million. The carrier’s CEO Neil Mills commented that the carrier is “pleased” that yields in the market remained stable despite an 11% increase in domestic seat capacity, adding: “We remain optimistic about the growth in domestic passenger traffic during the next 12-18 months and expect the industry will grow in the 14-16% range”. The Delhi-based carrier has declared a profit for the last five successive quarters. 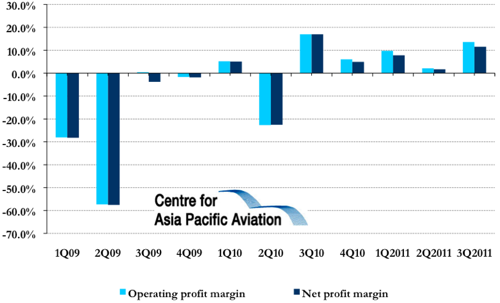 During the Dec-2010 quarter, SpiceJet’s fuel costs increased by 49.9% to USD68 million due to the increased cost of aviation turbine fuel and an increase in the number of flights the carrier operates. Aviation fuel was priced at INR47,816 (USD1047) per kilolitre on 01-Jan-2011 in Mumbai, up 24% year-on-year, according to Indian Oil Corp, with ATF prices up 15% in Dec-2010 compared to Jun-2010 levels. This means jet fuel prices have increased to close to 45% of SpiceJet's total operating costs. As previously reported by CAPA, airlines in India are expected to be able to absorb the impact if crude remains in the USD85-95 range, but increases above this may affect profitability.

Source: Centre for Asia Pacific Aviation and airline reports
* Based on the conversion rate USD1 = INR45.70

The carrier also faced a Minimum Alternative Tax (MAT) impact of INR235 million (USD5.2 million) in the quarter prompting Mr Mills, in an interview with Hindu Business Line to comment: “The net profit is not really a dip. We have had to pay MAT this year, which we did not last year”. 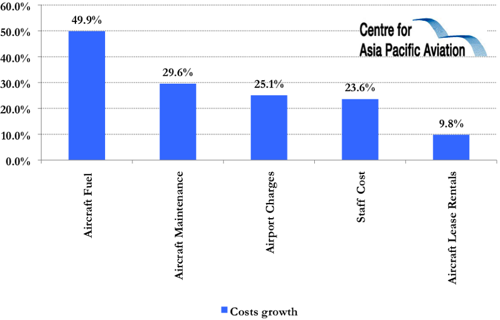 The increase in fuel costs outpaced a 27.9% increase in revenue to USD181.6 million. The carrier’s passenger numbers, however, surged 33% as improved economic conditions and rising wages boosted travel demand and the carrier added its first international destinations.

To boost capacity by 40% in 2011; LCCs to outpace industry average growth

However, the carrier plans to focus on increasing its regional network with CCO Samyukth Sridharan stating: "We are not fussed about flying international. We see massive opportunity for growth in India”. Mr Mills added: "We are not looking too far away from India... international is not a prime focus of our business".

Mr Sridharan added that there “are good signs” that the market can continue growing at rate of about 18% in terms of passenger numbers. Mr Mills added that he expects the LCC to grow "well beyond" the industry average of 14-16% over the next 12-18 months, stating: "I think budget airlines will grow at a big proportion. We are not only growing at the market pace, we are actually outpacing that”. Load factors for the LCC are expected to exceed 80% in FY2011.

The carrier will increase its fleet to 40 aircraft in 2011 from 25 at present, with the carrier’s fleet to almost double in size by 2013.  The airline will receive 15 Bombardier Q400 turboprops in the 13 months from Jun-2011 and will add seven Boeing aircraft in 2011 for a total fleet of 32 Boeings and eight Bombardiers by year end.

SpiceJet plans to hire 1,000 crew and 40 pilots in 2011, joining the nation’s other fast expanding LCCs in the hiring spree for 2011. Air India Express will hire around 700 employees with IndiGo planning to hire between 1000 and 1200 staff members including 400-500 cabin crew and around 400 airport personnel.  Jet Airways, meanwhile, will require over 300 pilots in the next three to five years.

The expansion plans came after the LCC gained fresh investment from billionaire Kalanithi Maran. Mr Maran, the founder of Sun TV Network Ltd, and his associated company, KAL Airways Pvt increased their stake in SpiceJet to 39% in Nov-2010. Mr Maran and KAL originally became the carrier’s largest shareholders in Jun-2010 purchasing shares from investors including Wilbur Ross. Mr Sridharan added: “What has clearly helped us in our business is to define our direction with one clear owner who is willing to support growth. We have very clear growth plans.”

With a new owner, a new CEO in Neil Mills (replacing former CEO Sanjay Aggarwal who suddenly departed when the new ownership changes were announced), an almost new board and a new focus and expansion plan - comprised of adding new destinations, increasing density on some routes and an increased focus on medium-sized regional operations -  2011 will be an interesting year for SpiceJet. And all these changes are occurring at a time when the domestic market is rapidly expanding.

SpiceJet is also now entering a new phase of growth. In the past few months, the carrier has commenced its international expansion and ordered 30 new Boeings and 30 (15 firm and 15 options) Bombardiers with its aggressive domestic expansion plan in mind. This growth profile has been confirmed by Mr Mills who has commented: “We can’t afford to stop growing. We are leasing more aircraft next month as we need to add capacity to keep our market share.”

Another key step is a new focus on regional operations, supported by the Bombardier aircraft with SpiceJet CCO Samyukth Sridharan stating the airline has a long list of smaller cites that have traffic and poor connections, but cannot support a narrowbody operation.  According to Mr Sridharan, the next wave in India’s aviation will come from small towns where the population is affluent enough to fly, but does not have the option. SpiceJet plans to fly to almost 60 new cities including those such as Shimla, Kulu, Vijayawada and Belgaum. While some of these routes do have flights, fares are relatively high with Mr Sridharan commenting: “It is cheaper to fly to Kuala Lumpur or Singapore than flying to Manali or Dharamshala. We hope to change that.”