SpiceJet, which currently has a 12% Indian domestic market share, stated it is considering expanding domestic capacity as it takes delivery of four new aircraft in 2010 (followed by a further three aircraft in 2011) reflecting a recovery in air travel demand. The carrier is also awaiting approval to expand internationally, with the carrier stating it expects approvals in Apr-2010 and the introduction of services in late May-2010.

SpiceJet CCO, Samyukth Sridharan, stated the carrier is looking to expand routes connecting major metros and mini-metros of the country, such as New Delhi, Mumbai, Hyderabad, Chennai and Bangalore, with the carrier also considering expanding into Tier II and Tier II cities, which the LCC currently does not serve. Shares in the carrier gained 4.3% yesterday.

All Nippon Airways’ shares rallied 3.1% yesterday, after Citigroup Global Markets Japan raised its rating on the firm from “hold” to “buy”. On the other end of the spectrum, and also in the Japanese market, Skymark Airlines’ shares slumped 7.4%.

Also weaker yesterday was Thai Airways’ shares, which fell 0.5%. The carrier’s President, Piyasvasti Amranand, stated the carrier’s planned rights issue would be proposed for Cabinet approval in Mar-2010. The Thai Government is expected to inject USD301.4 million into the carrier under the rights issue, to maintain its majority stake in the airline.

For all this and more coverage of today's Asia Pacific aviation developments, including Thai Airways' plans to increase its stake in Nok Air and a rundown of Thai's Summer network changes - and much more - see Asia Pacific Airline Daily.

Markets in China, Hong Kong, Taiwan, and Singapore were among those closed yesterday. 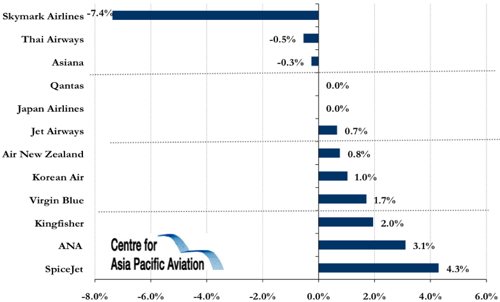