China Eastern Air Holding, parent of China Eastern Airlines, meanwhile stated it swung to a profit in 1H2009, on improved domestic travel demand and as the company cut costs by 12% (or USD16.5 million). The carrier expects to return to the black in 2009.

In the Indian market, Jet Airways shares gained 0.1% yesterday, but declined the most in more than a month during the day in Mumbai trading (by as much as 9.6%), after posting a USD47 million loss in the three months ended Jun-2009. The carrier continues to lose market share, with domestic passenger numbers down 17.8% in Jun-2009 (total pax down 11.1%), with cargo volume slumping 11.3%.

Also in the Indian market, SpiceJet's shares gained 1.3%, after the carrier returned to profitability in the three months ended Jun-2009, with a USD5.5 million profit (compared to a USD26.8 million loss in the previous corresponding period), in what CEO, Sanjay Aggarwal, described as an “amazing result” in the current environment. Revenue increased 31.2% in the period. Kingfisher's shares gained 1.6% yesterday.

Leading the decliners on Monday was AirArabia, which slipped 3.9%, the largest reduction since 13-Jul-09, with Emaar Financial Services stating the reduction is a result of a “knock-on effect” after Ryanair reported lower-than-expected financial results. AirArabia is scheduled to release its financial results early next month. 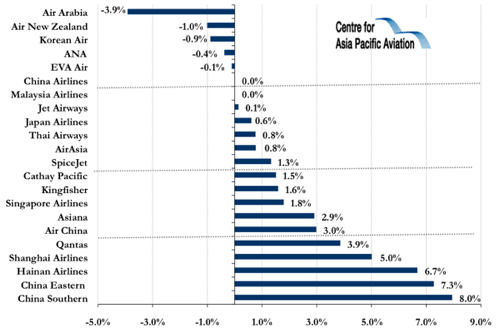