Vueling's shares were up 1.8% yesterday, following the previous day's 10.1% gain, on news that the Spanish Government will offer airlines EUR600 million of credit through the Official Credit Institute (ICO).

The measure will expand credit lines already available to Spanish airlines, which have struggled from reduced demand levels due to the economic crisis.

WestJet, which on Wednesday closed a CAD172 million (USD161 million) financing agreement, is expected to increase its cash balance to USD830 million after the transaction.

It has been speculated that WestJet, which expects to enter into codeshare arrangements with various airlines in 2010, could expand to include a foreign equity partner.

US airline shares fell on Thursday, reflecting overall weakness in the market and increased oil prices. JetBlue’s shares led the slump, down 8.5%, with AirTran (-7.5%), Southwest (-6.4%) and Allegiant (-3.7%) also weaker. 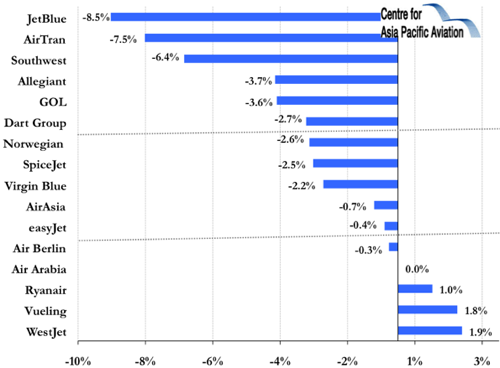