Southwest Airlines (+0.3%) ended Tuesday (14-Dec-2010) slightly higher, despite the majority of North and South American airline stocks falling for the day. Southwest gained after American Antitrust Institute (AAI) Vice President Diana Moss stated the proposal from Southwest Airlines to purchase AirTran is unlikely to meet with antitrust enforcement resistance “based on what we can gather from the (Justice Department’s) public statements in other recent airline mergers”.

However, the AAI stated the merger could diminish the overall effect of low-cost competition in the industry. AirTran (-0.1%) slipped for the day despite the news.

US Airways (+0.2%) also made a marginal gain, after Barclays raised its price target for the carrier’s stock to USD15. The analysts maintained a "equal weight" rating for US Airways. Barclays stated it expects supply and demand balance in the airline industry to improve in coming years.

US Airways ended trading at USD10.53. According to Market Intelligence Centre, the carrier’s stock has ranged from a low of USD4.32 to a high of USD12.26 over the past 52 weeks.

Allegiant (-0.5%) meanwhile declined after Barclays cut its price target for the company from USD61 to USD59, stating it is risky to invest in Allegiant due to its uncertain outlook. The analysts maintained an "overweight" rating for the stock.

United Continental hopeful of deals with flight attendants and pilots

Elsewhere, Hawaiian Airlines (-3.2%) and United Continental Holdings (-3.1%) slumped for the session, with Canadian carriers WestJet (-2.7%) and Air Canada (-1.9%) also falling. During trading, United Continental Holdings CEO Jeff Smisek stated the carrier is “hopeful” the company will reach a new labour agreement with Continental Airlines flight attendants after a previous agreement was rejected. Mr Smisek also stated advanced negotiations are under way with pilots from Continental and United Airlines with “significant progress” made in merging the two carriers. However, the merging of the carriers frequent flyer programmes is expected to take at least a year to complete. 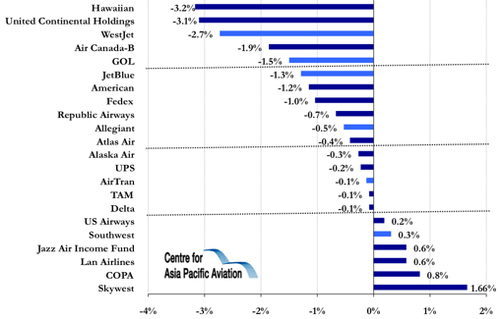