Southwest trumps JetBlue, US Airways and Continental in the yield stakes

JetBlue, US Airways and Continental Airlines reported continued yield weakness in Sep-2009, with the carriers continuing to feel the effects of the challenging operating environment. Southwest was the exception in the month, reporting PRASM growth of approximately 3% in the month.

All but one of the nine US majors (with the exception of US Airways) reported load factor improvements in the month, reflecting continued capacity reductions by the carriers and signs of a bottoming in demand. As a group, the nine carriers reduced capacity by approximately 4.7% in the month, despite capacity increases by AirTran, JetBlue and Continental. Among the smaller carriers, Allegiant stood out, with its continued expansionist strategy, which saw the carrier increase capacity by over 60% in the month.

Southwest stated it expects passenger revenue per ASM to have increased in the 3% range in Sep-2009 - the first monthly increase since Jan-2009 - thanks to big capacity cuts. 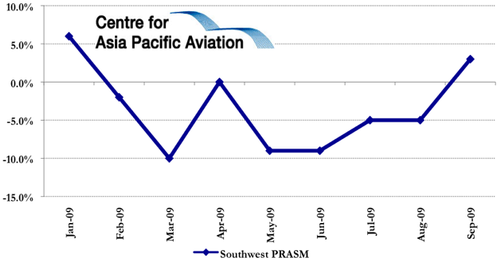 Southwest transported 6.8 million revenue passengers (+5.5% year-on-year), with load factors rising an impressive 11.3 ppts (to 74.7%) for three consecutive months of healthy load factor gains. It was the highest September load factor in Southwest’s 38-year history, due to a 7.8% capacity (ASMs) contraction.

Southwest’s load factor gains were larger than its US counterparts, with eight of the nation’s nine largest carriers reporting improved load factor levels in Sep-2009. Only US Airways reported a load factor contraction.

Southwest traditionally reports the lowest load factors among the major US airlines.

JetBlue reported a 12.3% increase in revenue passenger numbers to 1.6 million in Sep-2009, but experienced a 9% reduction in passenger revenue per available seat mile (PRASM) for the month (off last year’s very high base). 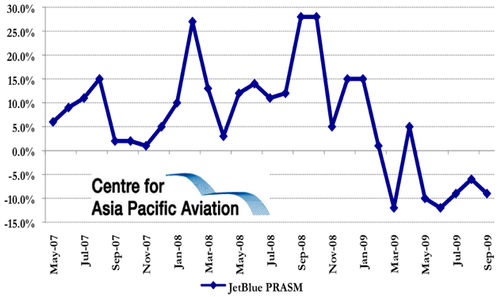 Continental Airlines’ weak yield performance also continued last month. The Houston-based carrier estimates that consolidated passenger revenue per available seat mile (RASM) was down by 18.5% to 19.5% year-on-year in Sep-2009 (mainline RASM down by 20.0-21.0%), for the third largest RASM contraction in the past 12 months - and eighth consecutive double-digit decline. It reflects continued discounting and ongoing weakness in premium travel demand, but also last year’s solid base, when PRASM rose in excess of 12% in Sep-2008. 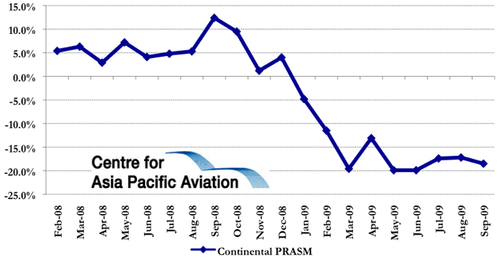 On the positive side, the Sep-2008 results included a 3 ppt increase in both consolidated and mainline RASM related to a reduction in the company's frequent flyer liability. Summing the reductions over a two-year period, Continental’s RASM reduction was 6.1% last month, an improvement from a combined two-year contraction of 11.9% in August and 12.6% in July. 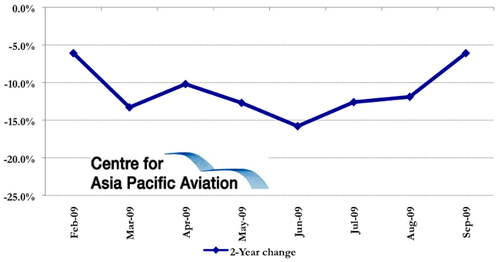 Looking forward, Continental expects 2009 load factors to average 81% (82% for mainline operations), on a 5.2% capacity (ASM) reduction. While no RASM figures were disclosed, contractions are expected to continue, as the US enters the weak Winter season and price discounting continues.

AirTran, meanwhile, reported that traffic (RPMs), load factors and enplaned passengers represented new all-time records for the LCC for the month of September, as it stimulated demand with a series of fare sales at the start of the traditionally slow Autumn season.

The carrier reported a 7% increase in passenger levels in the month, to 1.8 million, with load factor also on the improve, up 2.6 ppts to 77%.

Allegiant, which has been robust throughout the global economic slowdown, saw its passenger load factor slip for the fourth consecutive month in Sep-2009, although it reflects the carrier’s massive 63.2% year-on-year increase in scheduled capacity (ASMs). This capacity increase comes at a time when the majority of US carriers are reducing capacity, with only JetBlue, AirTran and Continental increasing capacity in the month (all of which were under 10%). 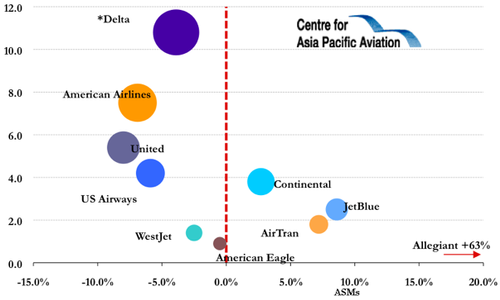 Allegiant’s scheduled service load factor declined 2.0 ppts in Sep-2009 to a still very solid 89.8%, with passenger numbers soaring 53.2% year-on-year to 288,761 (although this passenger figure is considerably lower than the major network and LCC carriers). 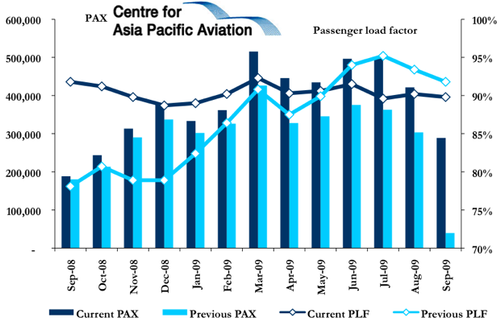 As ATA President and CEO, James C May, stated last month, the US aviation industry “continues to see a reduction in the number of air travellers, despite double-digit declines in fares”. He added, “while there are signs that improvement may be on the horizon, regrettably the demand for air travel remains weak”.

Careful capacity management and opportunistic capital raising exercises have however positioned the US airlines to survive the tough Winter that lies ahead.