Southwest to substitute some B737-700s orders for 800s; paves way for international expansion

Southwest Airlines on 15-Dec-2010 stated it would substitute 20 of its B737-700 orders for the larger B737-800 equipment with the first delivery scheduled for Mar-2012. The acquisition of the new aircraft could pave the way for the domestic carrier to expand into the international market with its own aircraft.

Announcing the plans, Southwest Airlines CEO Gary Kelly said: "The 800 represents many exciting opportunities for our employees and our customers. We are looking to the future and the 800 sets the stage to bring more destinations into the realm of possibilities for Southwest, to operate a more economical aircraft, and to offer better scheduling flexibility in high-demand, slot-controlled, or gate-restricted markets."

Mr Kelly, during a speech at the Wings Club in New York City, added that the carrier could use the B737-800s initially at busy airports in the north-east. He added that they could also be used on routes to Hawaii, Alaska, Canada, Mexico and the Caribbean. This would supplement the international network Southwest will gain through the acquisition of AirTran Airways.

With Southwest’s pilots unions ratifying their contracts to add the 800 to their current collective bargaining agreements in Dec-2010 and the flight attendants' agreeing to the switch in Nov-2010, Southwest is continuing to finalise discussions with Boeing regarding substitutions of the 800s for the 700 positions and configuration and equipage options. The B737-800s generally have around 40 more seats than the 700s.

The airline, which operates a B737-only fleet, did not disclose financial terms of the switch to the larger and more expensive 800 model. Boeing lists the average price of a 737-800 at USD80.8 million compared with USD67.9 million for the B737-700. 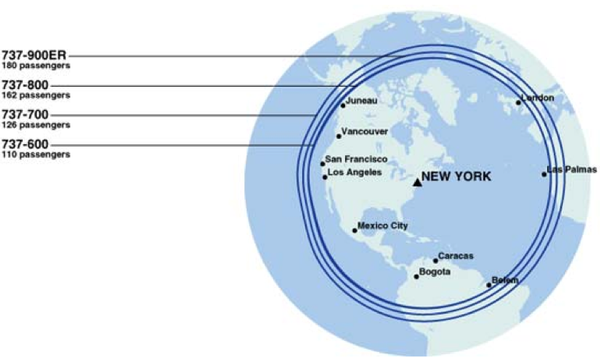 Southwest plans to grow its 737-800 fleet to at least 70 by 2014 with the carrier likely to switch all of its existing orders for the 700 over the next three years. The carrier does not plan to boost its total fleet beyond existing aircraft. The carrier has left its orders flat since the end of 2007, retiring older aircraft and replacing them with newer aircraft.

Southwest in service and on order fleet

Southwest increases pressure on Boeing to re-engine B737

Southwest Airlines CEO Gary Kelly, meanwhile, has increased the pressure on Boeing to upgrade its B737 aircraft with more fuel-efficient engines. Airbus this month announced it would develop a re-engined A320, dubbed the A320neo.

An all-new model for the B737 may not be developed before 2020 with Boeing delaying the decision on the B737 until 2011. Mr Kelly stated he is willing to wait “to a point” for Boeing to decide on offering a new engine before he looks at alternatives.

“When you talk about something that’s 10 years from now, that’s not a solution, that’s an idea. Who among us is to say it won’t be 15 years from now? In the meantime, we’re going to spend USD40 billion on fuel. In the meantime if there are real things that are alternatives, one is forced to look at that. We are very supportive of their efforts. There is no implied criticism here. At all. The Airbus neo announcement is a material event and that has to be factored in. We may need to understand – may being a key word – in depth what that’s all about,” Mr Kelly said.

Boeing has stated it would prefer to focus on a new jet because customers don’t see a business case for the interim-engine step. Boeing spokesman Tom Brabant said: “We’ll do our studies, work with customers, see what their requirements are, and at such time that we’re satisfied we’re doing right by our customers and by the market, then we’ll make that decision. If we decide that re-engining is the way to go, that would be in service around the middle of the decade. We’ve heard both ways from customers, that some are in favor of a new engine and some in favor of a new airplane.”

Southwest COO Mike Van de Ven in Oct-2010 stated that the carrier needs “new economics” given the threat of higher fuel prices and tighter travel budgets. He however added that Southwest was “indifferent” to whether this comes through new engines or a totally new aircraft, but waiting until 2025 to make that change is “not an option”. Boeing commented in Jul-2010 that the carrier would be heavily involved in its decision on which direction it went with its narrowbody programme with Boeing Chief of Commercial Airplanes Jim Albaugh in Jul-2010 commenting that whatever decision Boeing makes, it would be “something that Gary Kelly likes”.