Southwest Airlines was flat for Thursday (28-Oct-2010). Executive Vice President Bob Jordan stated during trading that the carrier plans to grow AirTran’s Atlanta hub with additional services to 20 or more cities that AirTran doesn’t fly to in a bid to increase its market share at the airport.

Meanwhile, Southwest CEO Gary Kelly reiterated that he expects the carrier to decide soon on when or whether to add B737-800 aircraft to its fleet. Mr Kelly stated the use of B737s would allow the carrier to launch extended services to destinations such as Hawaii.

Copa Airlines (+3.6%), TAM (+1.9%) and LAN Airlines (+1.6%) all rose for the session as wider Latin American markets gained for the day, outperforming the US market. Markets were up on improved 3Q2010 results in the region.

Elsewhere, Atlas Air (-3.3%) declined, ahead of reporting its 3Q2010 results on 01-Nov-2010. Analysts on average expect the freight carrier to report earnings per share (EPS) of USD1.17, according to LearningMarkets. United Continental (-2.1%) was also down. 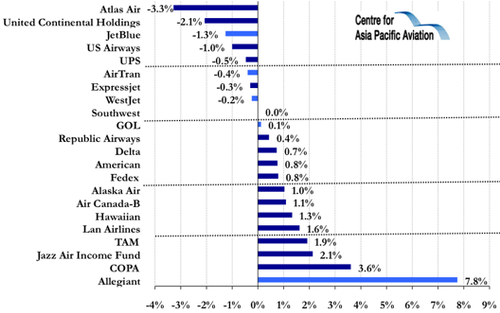