Southwest Airlines CFO, Laura Wright, stated the LCC is open to acquisitions, although such a strategy would come second to growing the carrier organically. The carrier has only made three acquisitions in its nearly 40-year history and failed in its bid to acquire Frontier Airlines last year.

Ms Wright commented in an interview with Reuters that while consolidation can "make a lot of sense under the right scenarios, it is a difficult thing to accomplish in our industry for a lot of reasons". However, she added, “if the right opportunity presented itself with all the right facts, we would certainly be interested".

Ms Wright also stated that travel demand has strengthened over recent months, adding that continued capacity discipline, as well as economic recovery, could pave the way for US airlines to improve their yields over the coming months.

In the Brazilian market, GOL’s shares slipped 2.4% yesterday. American Airlines CFO, Tom Horton, stated the carrier is in “advanced talks” with a Brazilian carrier about joining oneworld. Brazil’s largest airline, TAM, is scheduled to join the Star Alliance in 1H2010, while GOL, that nation’s second largest airline, is currently not a member of an alliance, but has a (recently expanded) codeshare agreement with American Airlines. 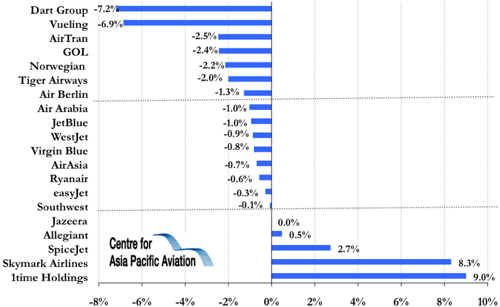