The majority of North and South American carriers’ stocks fell on Monday (19-Apr-2010), as the Ash Attack in Europe continues to affect a number of carriers’ operations. The falls came despite gains in the wider market, with the Dow (+0.7%) up on strong financial results from Citigroup.

Domestic-focused Southwest (+2.8%) was one of the few carriers to gain on Monday, reaching a 52 week high after JP Morgan raised its price target for the LCC from USD12 to USD17 and rating from ‘Underweight’ to ‘Overweight’. The analysts attributed the increase to their belief Southwest is successfully taking unit revenue from competitors, thanks in part to its no baggage fee policy. Southwest is to report its 1Q2010 financial results on 22-Apr-2010. On average, analysts expect the carrier to report an earnings per share (EPS) profit of USD0.03, compared to a loss of USD0.03 per share in 1Q2009.

US carriers losing USD35.8 million per day in revenue from Ash Attack

Also during trading, AirlineFinancials.com airline analyst and founder, Robert Herbst, estimated the five US carriers which operate services to Europe have been losing approximately USD35.8 million per day since the start of the European shut down on 16-Apr-2010 . Daily revenue loss estimates per carrier are as follows:

United, Delta, Continental, American and US Airways were all down as a result.

Elsewhere Air Canada (+5.0%) made the day’s biggest gain, despite analysts at Citigroup Investment Research estimating the carrier is losing USD10 million per day in revenue from the closure of the European airspace. 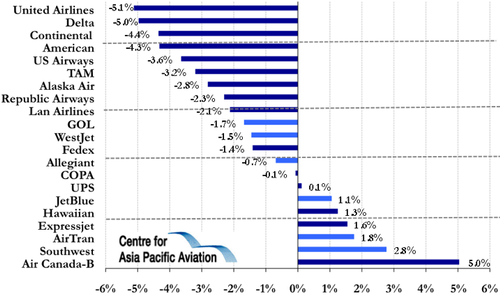