Southwest's shares gained 0.4% yesterday, as the carrier stated it expects passenger revenue per ASM to have increased in the 3% range in Sep-2009 - the first monthly increase since Jan-2009, thanks to big capacity cuts.

Southwest transported 6.8 million revenue passengers (+5.5% year-on-year), with load factors rising an impressive 11.3 ppts (to 74.7%), for the highest September load factor in Southwest’s 38-year history, due to a 7.8% capacity (ASMs) contraction. 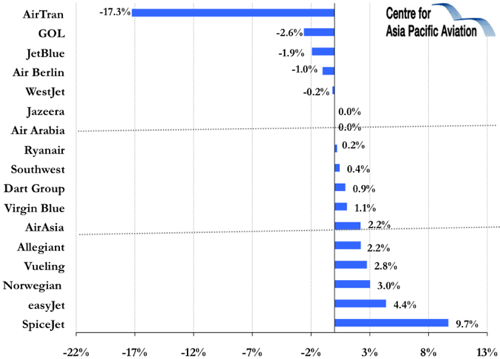 Across the Atlantic, Scandinavia's fast-growing LCC, Norwegian, released its Sep-2009 traffic results, and its shares gained 3.0% in response yesterday.

The LCC reported a yield reduction in the month of 4% (related to the removal of fuel surcharges that covered last year’s record high fuel price), with unit revenue down 5%. The carrier carried 24% more passengers in the month (to 1.0 million), while load factor slipped 1.0 ppt to 77%.

Also in Europe, shares in easyJet and Ryanair gained 4.4% and 0.2% yesterday, after SocGen raised its ratings from 'hold' to 'buy' on both carriers. (Comparatively, British Airways was downgraded from ‘hold’ to ‘sell’ and Lufthansa was downgraded from ‘buy’ to ‘hold’).